For those around at the very beginning, it proves to be a sight to bring a tear to the eye...

The three green and white helicopters, all lifting off the ground simultaneously, all rigged with the latest medical equipment and all carrying specially-trained paramedics and consultants.  It is an incredible sight, but one that is in stark contrast to the charity’s humble origins. But every great story must have a beginning...

The charity’s roots go back to 1991, when the Great North Air Ambulance Service Appeal was launched with the aim of providing the North East of England’s first helicopter air ambulance. It took four years to raise enough money to bring this dream to fruition. This was allowed to happen thanks largely to the support of the Barbour Family Trust, which donated £720,000 over eight years. The first aircraft was bought, and in line with the original plans, the helicopter was the immediately donated to the Northumbria Ambulance Service NHS Trust.

The first helicopter had running costs of £360,000 every year. Unfortunately, donations from the public were not enough to cover this sum, so the decision was taken for the NHS Trust to absorb the costs, with public donations being reserved for the eventual replacement of the aircraft. But it became increasingly apparent that the arrangement was not a sustainable one, and that alternative plans would have to be made if the service were to survive. Spiralling maintenance costs and the relatively low level of public donations were major causes for concern, as was new European law which would render the helicopter obsolete by 2006 at the latest. The money was not there to replace the existing aircraft; it was barely in place to keep it flying.

In 1999 came the first murmurings of a plan that would eventually lead to the saviour of the Great North Air Ambulance Service. Discussions were held to examine the possibility of the charity totally funding the air ambulance operations. For this to work, it would have to raise its fundraising to levels never previously envisaged. To make matters more difficult, the charity had no structure, no staff, and was not well known outside of Northumberland. The challenge was enormous, but the seeds of ambition had been planted.

A controversial but ultimately visionary decision by the then chief executive of the North East Ambulance Service NHS Trust, Simon Featherstone, really set the wheels of the new-look charity in motion. He realised that if the charity was to be successful, it would not be under the control and strict guidance of the Ambulance Service. From this moment, the NHS began its gradual withdrawal from the running of the helicopter’s operations.

The charity in its infancy was not immediately in a position to withstand the burden of supporting the air ambulance operations. Public donations had never exceeded £50,000 a year. Interest in the fundraising lottery had dwindled to just 900 members. It had just one active volunteer. It had no office, no infrastructure, and 10,000 undistributed collection tins.

On June 1, 2001, the charity appointed its first ever full time employee. Grahame Pickering, who had previously worked on the helicopter as a paramedic, set out to keep the aircraft flying. Working from home with just a second hand computer and telephone, he set the aim of raising the £60,000 a month to keep the charity in business. Grahame had resigned from secure and pensionable employment to take up the challenge, but he had seen first-hand how vital the service was, and he would not be deterred.

Although the determination and commitment of the early organisation was not lacking, it was financial support which was really needed. To achieve that end, an effective infrastructure was needed to attract and manage the money required. But establishing infrastructure costs money. The charity was trapped in a vicious circle and in August 2001, an assessment revealed that it would not survive more than two years as it was. The trustees considered the possibility of withdrawing the service and liquidating the charity.

Thankfully, talks with the North East Ambulance Service Trust proved fruitful, and it was decided that the Trust would continue to support the service for another three years, until the charity had expanded its activity and increased its income to the sustainable level of £1,000,000 a year. In May 2002, the charity was registered with the Charity’s Commission. 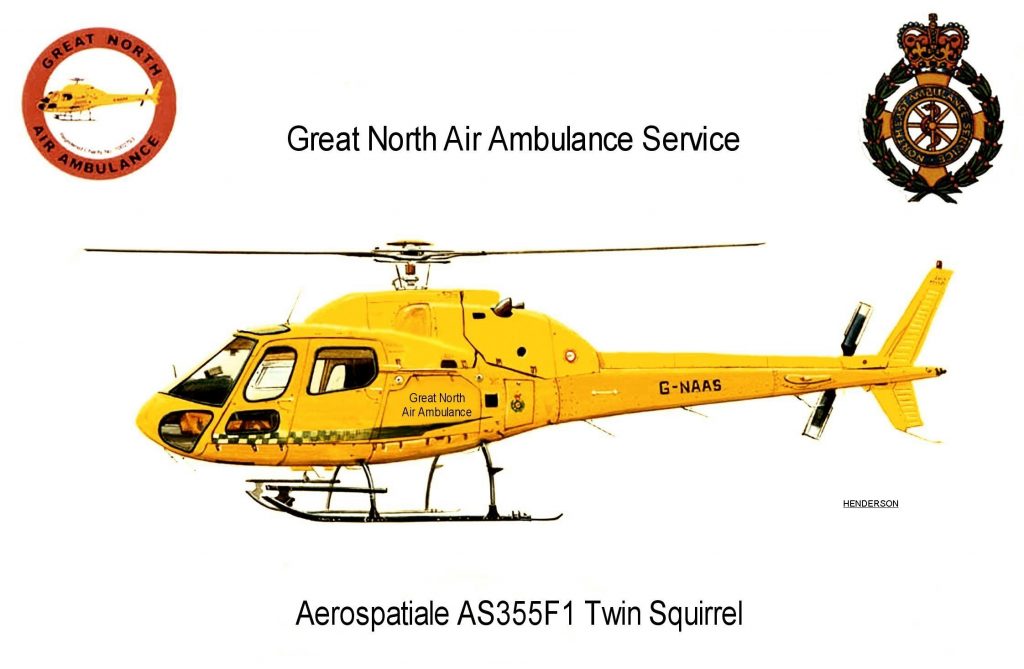 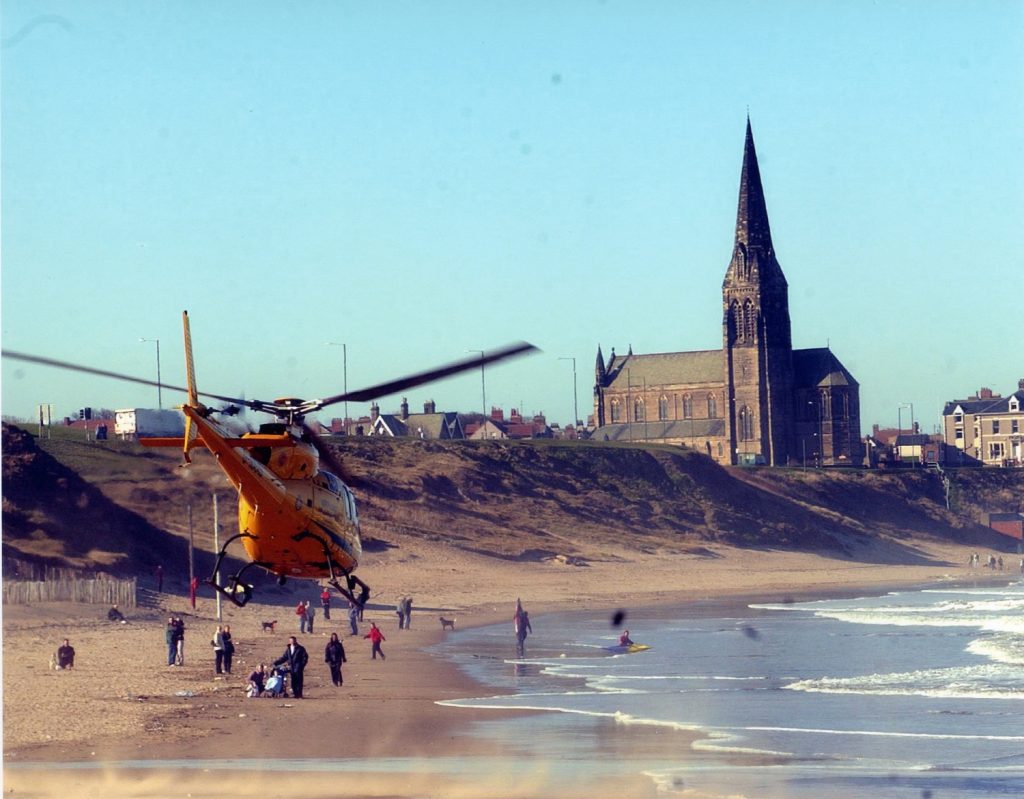 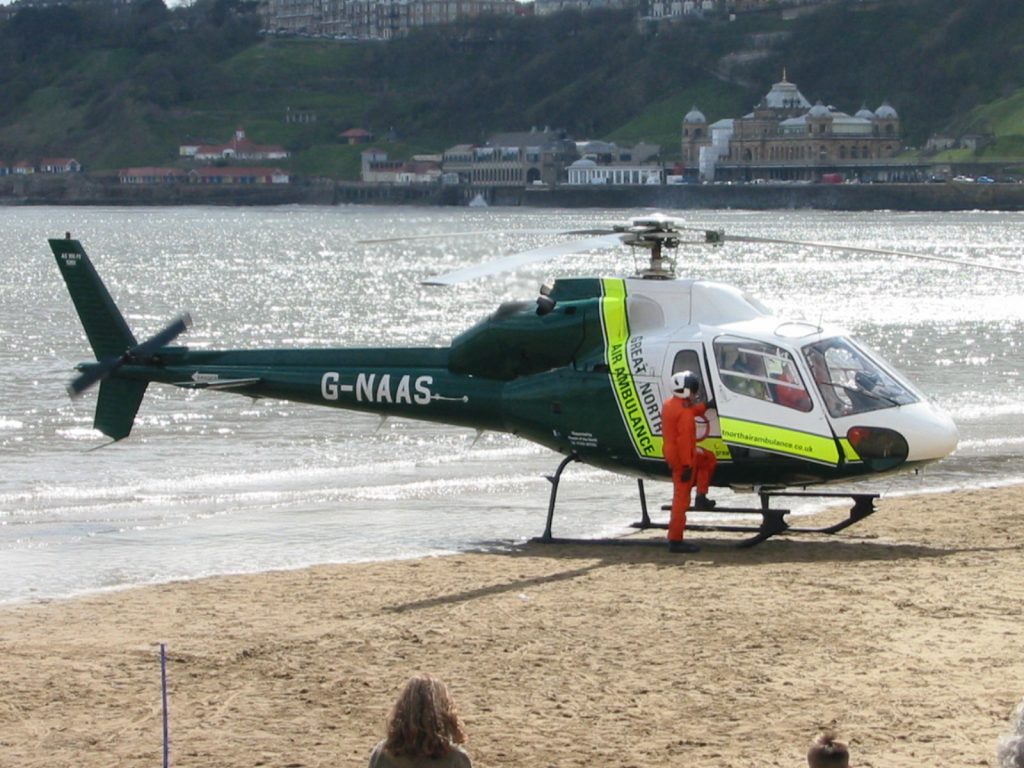 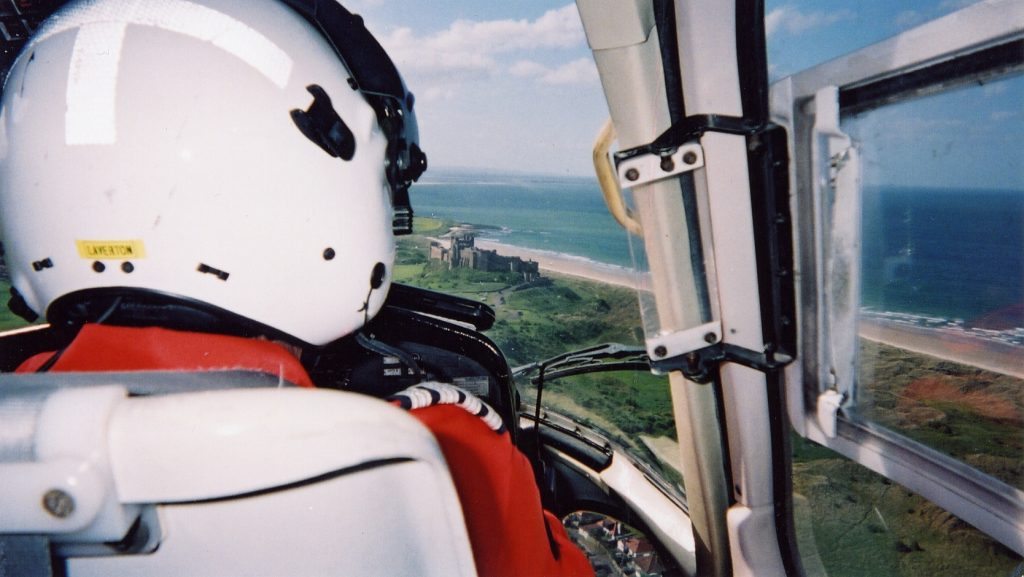 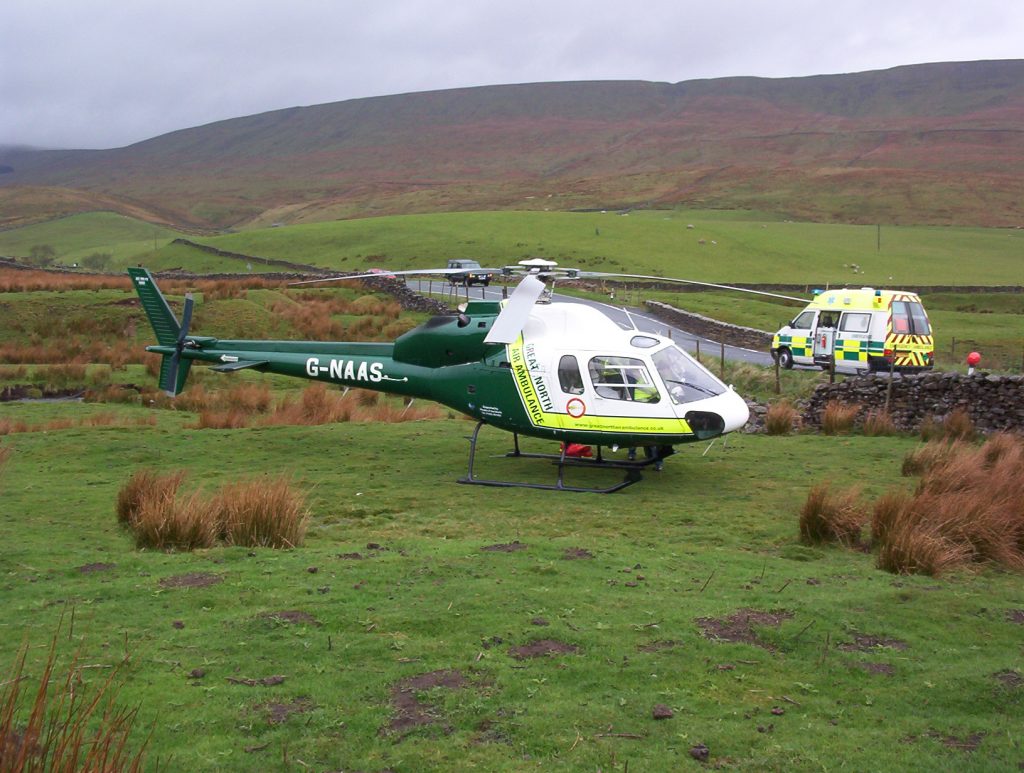 A time of growth

Within three years of securing the continued support of the North East Ambulance Service Trust, the charity was revolutionised. It had increased its income from £100,000 a year to the target of £1,000,000 a year by 2004. It had provided a second aircraft for the North East based at Durham Tees Valley Airport. It had introduced doctors onto its crew, transforming the level of care it offered. It had succeeded to such a level that when the Government had taken the step of issuing emergency funding to all UK air ambulances in 2002, the Great North Air Ambulance Service was found that it no longer qualified for the grant. It had reached independence.

But what had happened to drag the charity from its struggles of 2001 to its relative stability of 2004? A steady stream of improvement had been set in motion which would transform every aspect of the charity’s function – an infrastructure was established to focus the fundraising effort, increasing income; a partnership was forged with James Cook University Hospital in Middlesbrough, to introduce doctors to the crew; paramedics were put through rigorous in house training additional to the high standards they had already received; the lottery was also brought in house; the charity’s headquarters were opened in Darlington; its Trading Company began active trading, providing an ever increasing revenue stream through clothing collections and office recycling. This swift development would not have been possible had the members of the public not taken this cause to their hearts. Their ever-increasing support, as well as the advances in the level of service and its behind-the-scenes operation, meant that the foundations had been laid for the growth of the next decade.

By the end of 2004, GNAAS had introduced a third helicopter to its fleet, based in Cumbria, and upgraded the Durham Tees Valley Airport-based aircraft to improve performance and reliability. But the rapid growth of the charity was brought to a shuddering halt when, within the space of several weeks, serious floods hit Cumbria, and a devastating tsunami struck South-East Asia. The resulting response from members of the public was overwhelming. Millions of pounds were pledged to rebuild the worst hit communities. But while the response was unquestionably commendable, it came at a serious cost to GNAAS. The management soon realised that donations to its service had all but dried up and there was little option other than to ground the Cumbria and Northumberland-based aircraft in order to keep the charity solvent. It was a heart-breaking decision, but the charity would not have survived had swift action not been taken.

However testing at the time, the setback proved to reinvigorate public support behind the charity. After months of hard work by the charity and its volunteers, the Cumbrian service was restored in August 2005. The region had taken the air ambulance to its heart, and thanks to the increased levels of donations, their service was expanded to seven days a week in May 2006. In September the same year, the aircraft was upgraded. In January 2007, the charity’s position had recovered sufficiently enough for it to restore the Northumberland service. 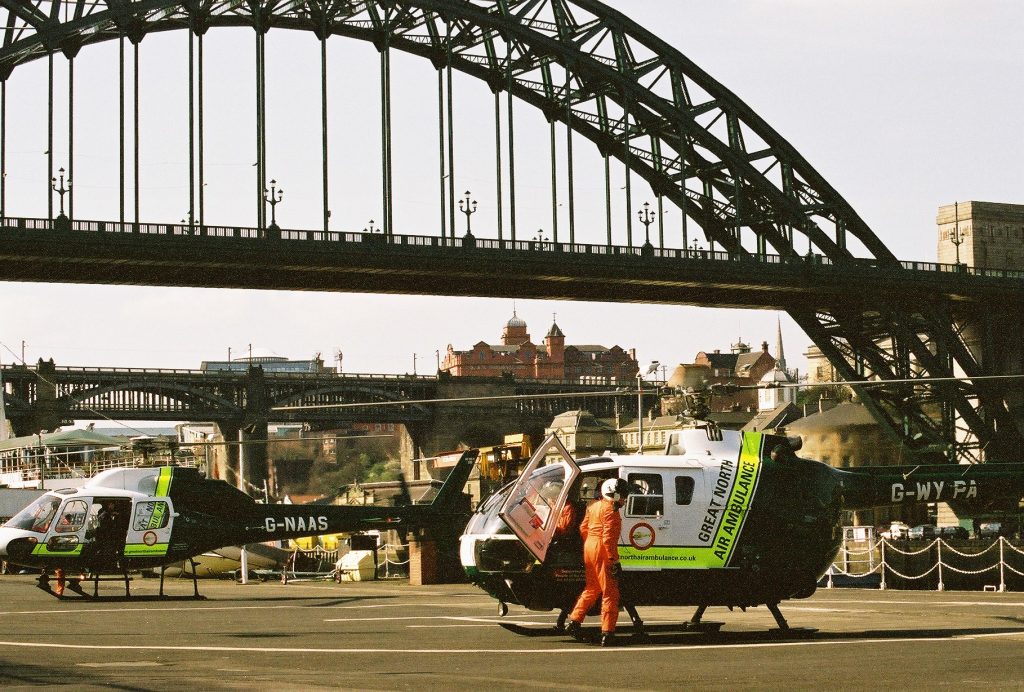 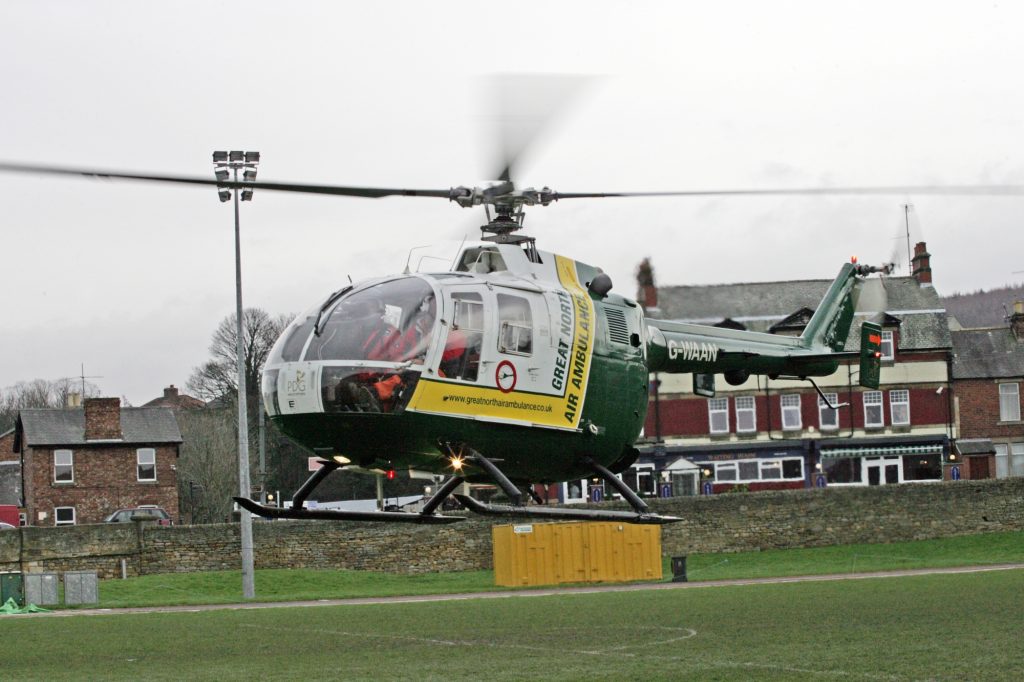 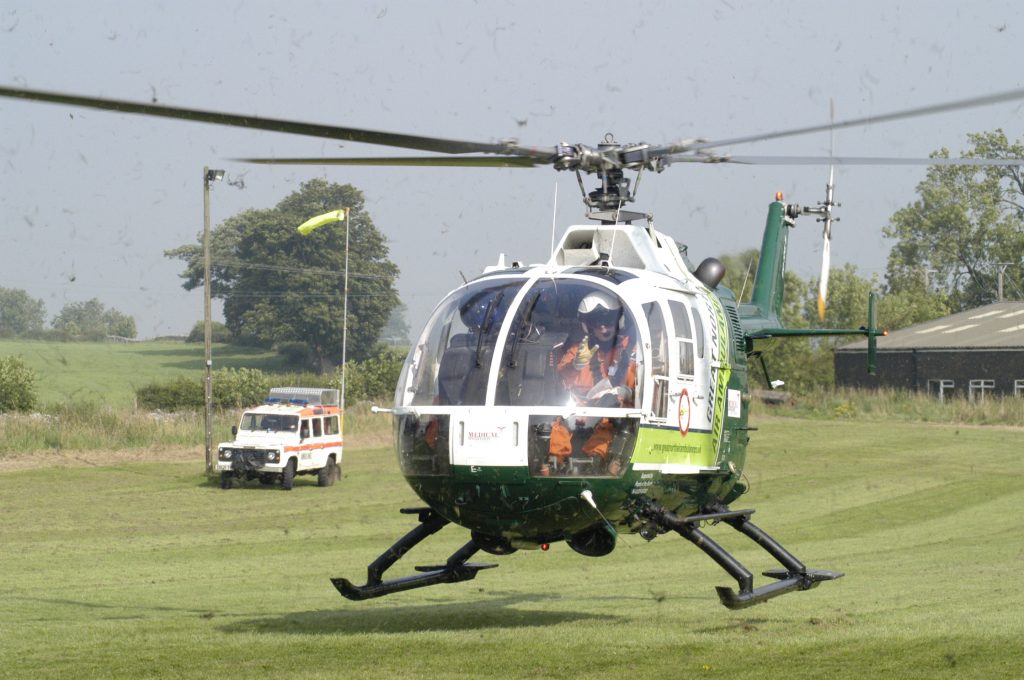 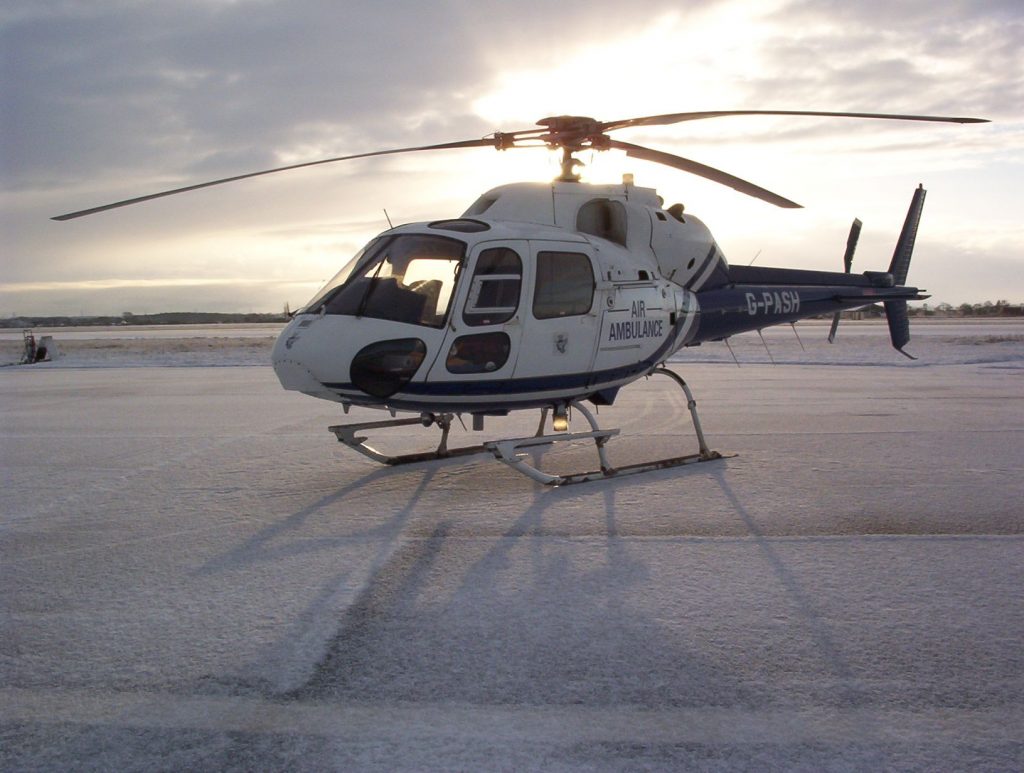 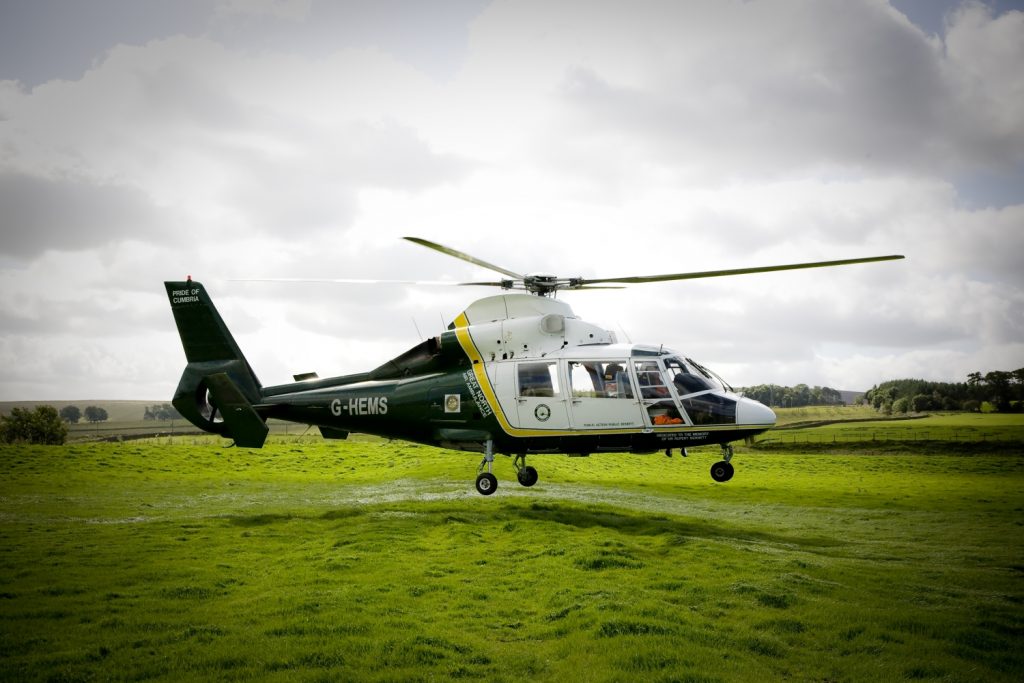 Since the funding crisis of 2004/05, the charity has not looked back. The service has continued to expand and in 2010 the decision was taken to buy three helicopters in order to ease the financial strain of leasing the aircraft. In March 2010, a deposit was placed on the Guardian of the North helicopter, which arrived in the North-East after undergoing a refit. It was followed in 2011 by the new Pride of Cumbria aircraft, which was stationed at Langwathby, near Penrith. Later the same year, a third helicopter was secured and went to work across the two bases.

Now the work begins on securing the future of these three aircraft and their crew. Although great strides have been taken to safeguard to service, past experience has taught the charity never to take the support of the public for granted. In the 2017/18 financial year, it cost £5.17m to operate the service. Raising this is a huge task, but the Great North Air Ambulance Service has never been known to balk at a challenge, and it is unlikely to start now. 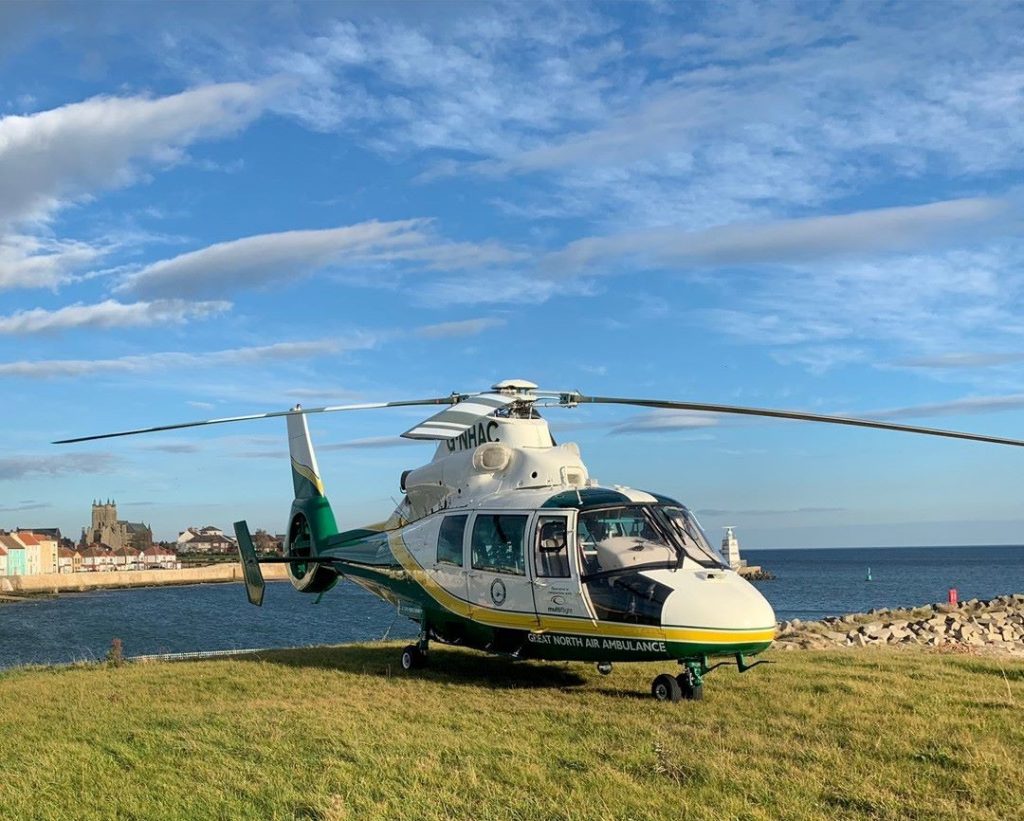 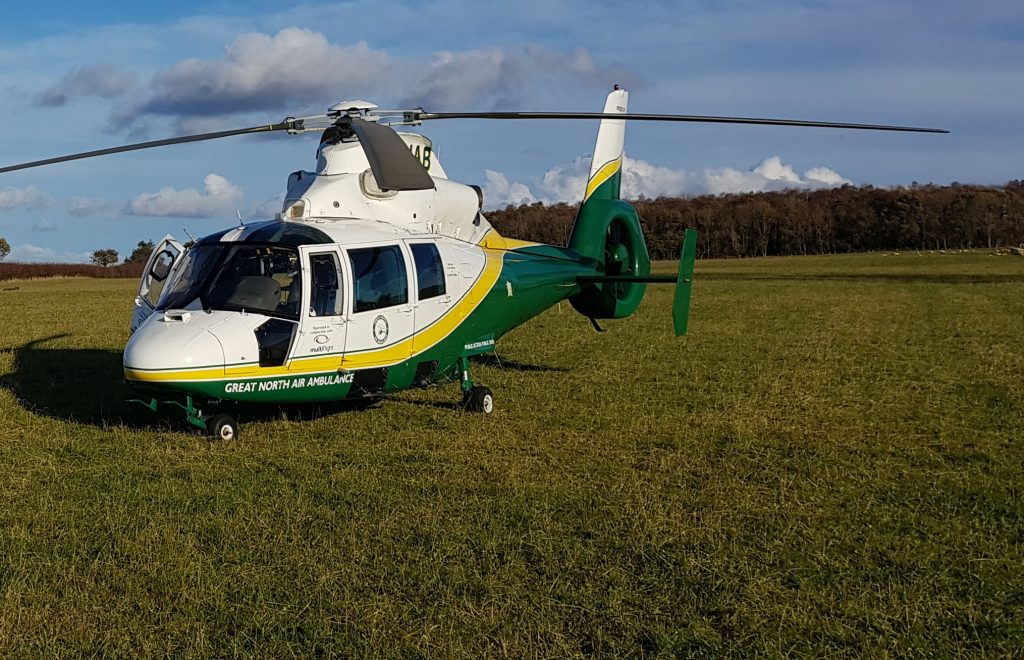 We can only continue to fly and to improve our service through your donations. Please consider making a contribution to help safeguard our future.