The GYRO is a new fundraising challenge in aid of the Great North Air Ambulance Service.

Brave cyclists will travel from our Teesside base to our Penrith base and back in this epic adventure across the country.

This year’s GYRO will consist of two challenges, the first being the Base to Base Challenge which will consist of a 150 mile cycle from our Teesside HQ to our second base in Langwathby – and back!

As an alternative, you will also be able to choose to take on the 75.9 mile medium ‘Challenger’ route. Although seemingly easier challenge compared to the Base to Base, it will still feature tough climbs which will challenge even experienced riders. Find out more information about the two rides here. 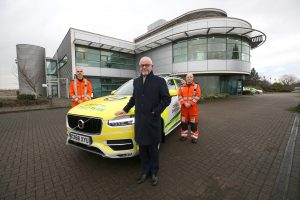 Both rides will start from our new headquarters and world-class training facility at Progress House, Urlay Nook.

The pre-existing office block has been renovated into a world-class facility and in late April fundraising and admin staff moved in. Work has now started on the hangar and landing facilities for our aircraft.

The site will house the North-East’s first Medical Centre of Excellence, providing training and education to pre-hospital clinicians from all over the world.

The ride will then begin for the day as we head west to Penrith.

You may find the less traffic on the open roads of Teesdale a perfect getaway from the pressures of town.

The challenge will really begin as we ascend through the climbs of the Pennines.

Langdon Beck is situated halfway between Durham and Penrith.

The vast areas of open moorland make for beautiful, towering views, and you will experience some of the longest ascents in England.

Hartside made an appearance on Road Cycling UK’s list of 10 Best Cycling Climbs in the North Pennines after The Tour of Britain climbed the Fell in 2015.

The Hartside Pass, situated in the North Pennines Area of Outstanding Natural Beauty (AONB), climbs to  magnificent views across the Solway Firth to Scotland at a  height of 1904 ft. 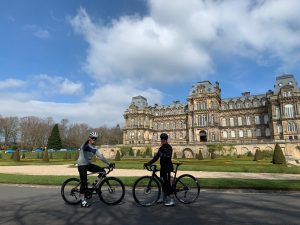 The Bowes Museum has a nationally renowned art collection in the heart of the historic market town, Barnard Castle.

The structure, built in the style of a French chateau, makes for a remarkable work of art in itself, and has collections inside which span the 14th to the 19th centuries.

Bowes Museum has a captivating effect on a picturesque town which the National Trust titled one of the most important museums outside London.

After reaching Barnard Castle, the ride will split as the challenger route heads along quiet roads for the imposing climb over ‘The Stang’.

This ride lives up to the monumental name as it rises onto the northern edge of the Yorkshire Dales National Park.

The Stang is a tough climb with considerable variation in gradient. We are to face a tough first 0.6 miles, where the gradient is constantly above 10% and nudging towards 20%.

The middle section is deceptively gentle, however be aware of the false flats as this ride requires pacing!

At around 1.6 miles, the gradient picks up again and the real challenge begins as riders are faced with a gradient of 19% for the final 1500 metres.

Situated in the beautiful Swaledale Valley in the Yorkshire Dales National Park, the Dales Bike Centre has becoming a hub for cyclists across the dales with access to an extensive network of road and mountain biking trails.

The centre claims that there is no finer place than the Yorkshire Dales to cycle, after the 2014 Tour De France passed by their doorstep and being voted #2 in cycling Weekly’s Top 10 Places to Ride in the UK.

On the GYRO route, the bike centre will provide a location for one of the four feeding stations, where you can enjoy refreshments provided by GNAAS staff and volunteers before continuing their journey.

The tough climb is rewarded with a fast-flowing descent through the stunning Eden valley, which has been featured on BBC2’s Britain’s Heritage Heroes and ITV1’s ‘The Adventurer’s Guide to Britain’, towards the second airbase at Langwathby.

Our recently refurbished base on the outskirts of Langwathby, near Penrith, provides a safe and secure home for the Pride of Cumbria and our team in the North West.

As we welcome a reprieve on the legs, and GNAAS volunteers will be waiting to support riders and provide refreshment as they reach this turning point.

Leaving Langwathby, riders get to enjoy quiet picturesque roads and rolling country side as they head towards Appleby-In-Westmorland and then Kirkby Steven. 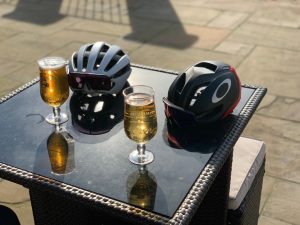 Kirkby Stephen signals the start of the final major climb and once riders have topped out at 500m on Barras Brow they will know that it’s predominantly downhill to home again through quiet rolling roads.

We would love for you to join the team and take on the GNAAS Yearly Ride Out.

Not only will you have a great day out experiencing this epic challenge and the beautiful sights, but you will also be playing your part in supporting the life-saving service which is GNAAS.