The Lake District could become home to the world’s first Jet Suit paramedic, according to those behind the concept.

A collaboration between Gravity Industries, which has developed and patented a 1050 brake horsepower Jet Suit, and the Great North Air Ambulance Service (GNAAS), has resulted in a test flight in the heart of the Lakes.

The test at the Langdale Pikes saw Gravity Industries founder and Chief Test Pilot Richard Browning fly from the valley bottom to a simulated casualty site on The Band, near Bowfell. The simulated casualty site would take around 25 minutes to reach by foot. The Gravity Jet Suit is able to cover that distance in 90 seconds, opening a range of possibilities in the emergency response arena.

The ground-breaking exercise was the culmination of a year of discussion between GNAAS and Gravity Industries.

Andy Mawson, director of operations and paramedic at GNAAS, identified the Lakes as a possible location for a Jet Suit paramedic after hearing of Mr. Browning’s work and then studying the charity’s own call-out data.

He said: “It showed dozens of patients every month within the complex but relatively small geographical footprint of the Lakes.

“We could see the need. What we didn’t know for sure is how this would work in practice. Well we’ve seen it now and it is, quite honestly, awesome.” 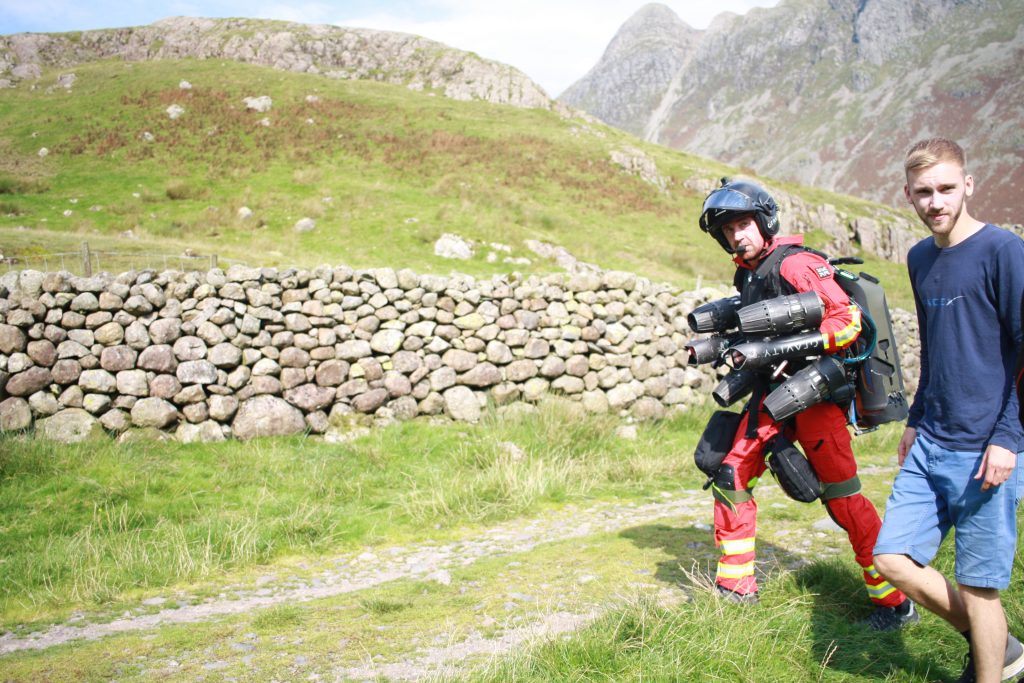 He added: “In a time in healthcare when we are exhausted with COVID and its effects, it’s important to still push the boundaries.

“Our aircraft will remain a vital part of the emergency response in this terrain, as will the fantastic mountain rescue teams. But this is about looking at supplementing those resources with something completely new.

“We think this technology could enable our team to reach some patients much quicker than ever before. In many cases this would ease the patient’s suffering. In some cases, it would save their lives.”

Richard Browning added: “It was wonderful to be invited to explore the capabilities of the Gravity Jet Suit in an emergency response simulation and work alongside the team at GNAAS. We are just scratching the surface in terms of what is possible to achieve with our technology. Emergency response is one of the areas Gravity are actively pursuing, alongside launching a new commercial training location at the world-renowned Goodwood Estate.”

GNAAS is a charity and relies on donations to survive. To find out more please call 01325 487 263 or visit gna.as/jet-suit

The next frontier in emergency response

The Lake District could become home to the world’s first jet suit paramedic.

The Air Angels Ball is back