Nick Copson of Woodland, near Bishop Auckland, survived a head-on collision near Witton-le-Wear on the A68 last year. Not only did he survive the initial impact, but he also overcame amputation, sepsis, bed sores, major organ failure and delirium. Here, in his own words, the former GNAAS patient tells his story.

September 13th 2018 when life changed forever. I was driving to work – 7.30am. Beautiful morning, driving down a hill and a lorry was coming the other direction, a car went head on into me. A lot of moons collided at that point which enabled me to be writing to you now.

The initial impact unbeknownst to me had severed my spinal cord at T6 level and shattered two vertebrae, this was a blessing as I couldn’t feel any pain below my chest. I had multiple compound fractures to my right leg and had a major bleed from the artery. I broke all my ribs, collarbone and punctured both lungs with the right lung bleeding out.

After the initial impact I hadn’t realised the extent of my injuries at first, then when I had a struggle with my breathing, I knew I was dying and thought I can’t leave this planet without saying goodbye. I retrieved my mobile phone and left a message for my wife and son saying goodbye. A young lady came and sat with me and I asked her to pass on the message to my loved ones, she insisted I tell them myself. That was my last thought as I drifted towards the lights. 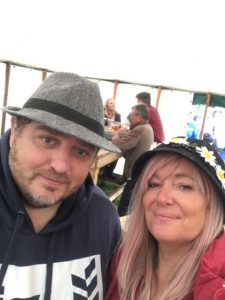 My car (my wife’s car which I kept using) was fitted with Onstar technology which alerted the emergency services, giving my GPS coordinates. My accident was in a rural location and I believed at the time they wouldn’t reach me before I passed away. The call went out to the air ambulance too, though they don’t normally fly until after 8am, though on this day, the crew had started early. Between all emergency services at the scene I had two of the top surgeons in the region looking after me. It took an hour and a half to release me from the car, I was unaware of this. I was airlifted to James Cook University Hospital.

On this day my wife had an hospital appointment and I had asked if she wanted me to go with her, she declined and was on the way to this appointment at about 8.45am. Upon the start of the journey she heard the travel report mentioning the road closure on the route I take to work, she thought it was strange I hadn’t mentioned it to her. She pulled over to check where I was. We have a find friends app on our phones so we know where we all are at any given time. It showed that I was at the point of the accident. My wife started panicking and rang me. The police answered my phone and advised my wife to go to the nearest doctors surgery and they will meet her there. After this point my wife’s work rang my wife asking if she was ok because they had been informed that the company car had been in an accident. The police picked my wife up from the surgery and then my son from work and blue lighted it, an hour journey to the hospital.

My wife informed both sides of the family, the majority of the family (very large) were there within three hours from across all parts of the country to offer support. 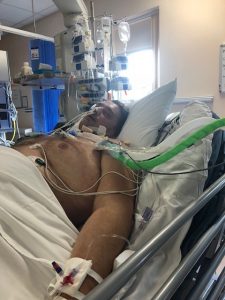 Upon arrival at the hospital I went straight down to the operating theatre. I had my right leg closed back together and the bleeding stemmed. My family was informed that they didn’t know the extent of my injuries until after three days when the bruising had settled and they should prepare for the worst. I was placed on a ventilator to aid my breathing and classed as very unstable, they couldn’t move me due to the extent of damage to my ribs. Six days later I had major surgery on my back and two titanium rods inserted. I nearly died on several occasions during this surgery due to my lungs.

My body started to give in. I had received bruising to my kidneys and heart. I went into major organ failure which included my skin breaking down. I developed a grade four bed sore on my back, the worst case they had seen when I eventually moved to HDU (high dependency unit). I was at this point in ITU (intensive care unit) which I spent three months in, mostly unaware of what was going on in the real world. After a month, the right leg was beyond saving and I was amputated below the knee. A further time later I had to have the same procedure on the left leg.

Due to my spinal injury, my family were informed that I wouldn’t be able to walk again, but I wasn’t out of the woods. My kidneys stopped working and I went onto dialysis, this was life threatening further. I had developed blood clots throughout my body and the dialysis procedure threatened to dislodge these which would kill me outright. My stomach stopped working and I developed full blown sepsis as my body was reacting to infections. In this time, I also contracted a yeast infection which went on to my eyes and should have resulted in blindness. I spent three months in ITU before I moved to HDU.

My time in ITU was horrific, I had no understanding of what was real or in my imagination. I suffered from delirium, which is dreams reacting from the high doses of sedation and medication. These dreams will stay with me for life. I have managed to record most of them to publish in support of understanding this occurrence for others.
When removing the staples that held my flesh together on the right stump, they hadn’t worked and I was left with a large open wound, which at the time the medical team thought would require plastic surgery.

I spent six months on a ventilator and from this point mostly breathed unaided. Due to my spinal injury the lower part of my lungs fall in my paralysed area, so this requires intervention twice per day and support through the night, for the rest of my life. 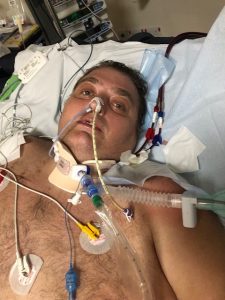 My bedsore has been the crux in my recovery. When I came down to HDU my consultant estimated a two year recovery and the probability of never sitting up again. That was January 2019. The mind is a powerful thing and we still do not know it’s full potential. I was told that I would need surgery on my right stump because of the open wound. I had never had surgery before my accident, and dreaded the thought at this point of having one. Miraculously my wound healed itself. My body had developed rapid healing capabilities, not only my leg wound, but my bedsore started making rapid progression. My wife had me on a high protein diet, I have currently lost nine stone, and she bought a fridge for my bedside. I contracted a strong strain of influenza and they threatened to place me back in ITU, I said I’m not going there I’ll heal myself. At that point I was on maximum care and scaring everyone. I closed my eyes and overnight I brought my needs down to a safe level. The mind is great.

I am now on the last stage of my bedsores healing and looking to be discharged  from hospital, this is after seven months, once healed fully I can then get into a wheelchair and have freedom again. Life is going to be about exploring new things and living all over again. I have had to learn to talk, feed myself and become a real expert in my own care. 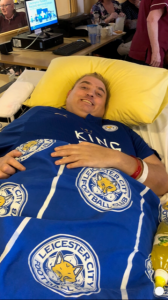 From all of this, I have had a smile on my face and a positive attitude. I have met some truly inspirational people which in turn find me inspiring.

I should have died, but truly given a second chance. We all seem to forget how fragile life really is.

Read more: Paramedic Marcus shares his perspective of the incident

GNAAS sent two crews to the incident, including two of the charity’s most experienced doctors. It was a case that required all the experience and equipment carried on board our aircraft.