Kerry Noble from Northumberland has two artificial knees, but this hasn’t stopped him from completing a 40-mile cycle challenge in aid of the Great North Air Ambulance Service (GNAAS).

The 74-year-old, from Belford, chose to take on the newly launched GNAAS fundraising event after being inspired by a friend and loyal supporter of the charity in his village.

The ‘Race to the Base’ event, will see fundraisers cover the distance GNAAS’ critical care team fly when returning to the air base from the Royal Victoria Infirmary (RVI) in Newcastle, the North’s main major trauma centre.

Participants can choose to take on the 32-mile challenge from the RVI back to GNAAS’ air base at Teesside International Airport, or the 42 miles from the RVI to their Cumbria base in Langwathby, Penrith. 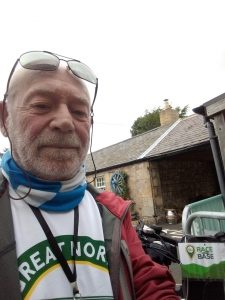 Originally, Kerry who’s retired, decided to take on the 32-mile challenge, but actually managed 40 miles on his electric push bike!

He said: “I have two artificial knees from parachuting. The only routes on my bike out of my house were the A1 motorway, which is treacherous or lots of hills, but I wouldn’t be defeated so I bought an electric bike.”

“My bum was numb by the end; I couldn’t have done it without the bike helping me along, but I still had to put the work in.” 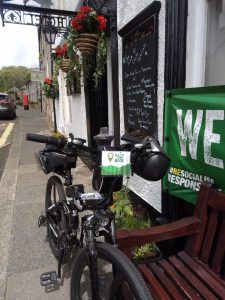 When asked what his motivations were for taking on the challenge, Kerry said: “Denise Morrison, a lady in my village, has been fundraising for GNAAS since 2008.

“Before COVID-19, the total raised was £31,000. I wanted to be part of the fundraising, but lockdown stopped all that and then I heard about this new challenge.” 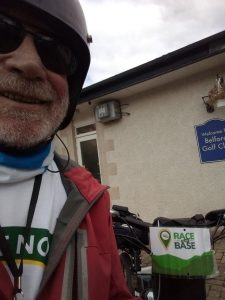 Born in Whitley Bay, Kerry spent time travelling before opening an outdoor centre in Belford in 1974 which he ran for 20 years. He then went on to become a chief parachute instructor. He said: “I have always worked at outdoor centres, so I have always had a lot of dealings with GNAAS and the air ambulance.

“We will continue to do what we can in our village to raise money for them.” 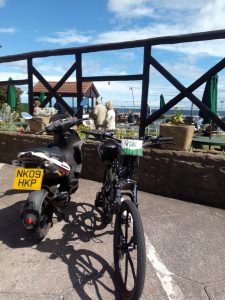 Jamie Walsh, paramedic and training manager at GNAAS said: “The Race to the Base challenge is an opportunity to stay healthy and active while raising funds for a great cause.

“This fundraising event will help to ensure our service carries on and is available to help those in need.”

By taking on this challenge, fundraisers will ensure that GNAAS can continue to cover the distance and save lives across the region.

Are you ready to ‘Race to the Base’?