A family who knows all too well the importance of the Great North Air Ambulance Service has visited the our new base to get a sneak preview of the new hangar.

The Maher family of Wallsend visited our new facility at Urlay Nook, Eaglescliffe, where the structure of the hangar has just been finished.

Seven-year-old Alannah Maher was airlifted last year after she was struck in the face by a heavy-duty chain in an accident on her great uncle’s farm in Brough, Cumbria.

The incident left her with severe facial injuries, and she spent a week in intensive care at the Royal Victoria Infirmary in Newcastle.

But a year later, she was joined by sister Aoife Maher, mother Camilla Hodgson, and father Paul Maher, as they visited Progress House and were shown around the new site by GNAAS paramedic Tim West, as well as staff from the construction firm Tolent. 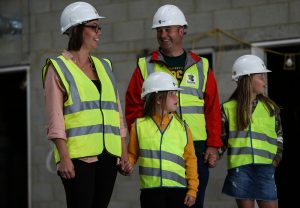 Mr Maher said: “GNAAS had such a positive influence on how quick Alannah could get to hospital, and although the time spent getting Alannah to the RVI was only short, it had a massive impact on how quickly the vital care she needed was given. For this, we will always be eternally grateful.

“It was a privilege for Alannah and our family to visit the new HQ building with its new training and development facilities, helipad and hanger and it’s quite easy to see that every pound donated to improve this charitable service is well spent and will go on to bring happiness and support to many more families in the future.

“It is now a service that we have taken to our heart and that we have raised money for, from a bake sale and partaking in the Great North Run. Our thanks will never be enough.”

Mr West said: “Alannah is a perfect example of why the Great North Air Ambulance Service exists, so it was fitting that she was one of the first members of the public to see up close the work that has been carried out on our new home.

“The facility will take our level of care to the next level, and we can’t wait to move in. But we just want to say to our supporters, including the Maher family, that this project is all thanks to you and your generosity.” 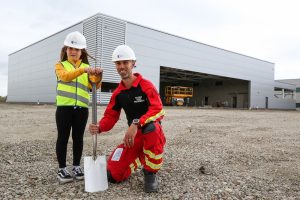 Rick Halton, regional director for Tolent: “This has been a fantastic project to be a part of, and one we can see making a significant impact on the day-to-day operations of one of our region’s most remarkable charities.

“We were delighted to show the Maher family around on site and we look forward to handing over the newly constructed helicopter hangar next month. A great job done by all.”

Our fundraising and administrative functions were moved into a pre-existing office block on the site earlier this year and we hope the helicopter and life-saving crew, currently based at Teesside International Airport, will move in next year.