Mother speaks of relief after glider crash teenager pulls through

When Miranda Rastrick’s 15-year-old son Olly suffered life-threatening injuries in a glider crash on an inaccessible Cumbrian mountainside, she was more than 300 miles away and about to go shopping.

Instead, Mrs Rastrick and her husband Phil drove six hours, almost the entire length of the country from their home near Southampton to Olly’s hospital bedside at the Royal Victoria Infirmary (RVI) in Newcastle.

It was a frantic drive, and one beset by an overwhelming fear for what awaited them in the North-East.

“I instantly thought he had died,” Mrs Rastrick said. “I was told the air ambulance had taken him to hospital, I knew it was very serious. It was unimaginable. I can only describe it as a numbness. I just had to be by his side.”

The incident happened on August 7. Olly had sustained breaks to his pelvis, femur, ankle and ribs, as well as a lacerated spleen and liver and a blood clot in his head. The glider he was piloting had crashed, believed nose first, into the ground almost at the top of Cross Fell, the highest point in the Pennines. An investigation into the cause of the crash is ongoing.

It was almost the worst combination – major trauma suffered in a remote location, far from the road. Had Olly faced a lengthy period on that hilltop, doctors believe he would have bled to death.

But fortunately, the Great North Air Ambulance Service (GNAAS) spotted the subsequent 999 call and set off to the scene while the call was still ongoing. Not only was GNAAS able to reach him quickly, but once on scene, the charity’s critical care team provided him with the blood transfusion and other advanced procedures that he so dearly needed.

After treatment on scene, Olly was flown to the intensive care unit at the RVI. Several hours later, after their nerve shredding drive, his parents arrived at the hospital. They were told that while he had sustained severe injuries, the early signs were that his brain and spine had escaped significant damage.

“It was a relief, but he wasn’t out of the woods,” Mrs Rastrick said. “I was scared but felt reassured that he was in the best possible place. Everything about that hospital was amazing from the moment we arrived to the moment we left.”

Over the next week, Olly’s condition stabilised to the point where the doctors in the RVI decided to slowly reduce his sedation. Within 24 hours of the process beginning, Olly regained consciousness, becoming progressively more responsive as he did so.

“A little while later, after they had removed the tube when they knew he was breathing by himself, he started to speak with a very croaky voice. The first thing he asked was ‘I need my Snapchat’. I thought, ‘that’s my boy’.

“Beyond his physical health, though, I just hoped that he would want to glide again. It’s been such a big part of his life. He’d been gliding with his friends almost every weekend for two years. I think I just wanted him to wake up like nothing had happened. I wanted my boy back.”

She did not have to wait long. Just a few days after waking up, Olly started making plans to return to glider training.

“I was so relieved,” she said. “After what we’ve been through, some people might think we should stop him from doing it again. But I’m not going to stop him. You could be injured driving a car or doing anything.

“He’s just the most level headed, mature boy. I absolutely trust him. He’s very focussed, he knows what he wants, and that is to be in the RAF. Gliding isn’t just a hobby for him, it’s a step towards flying Typhoons as a career.” 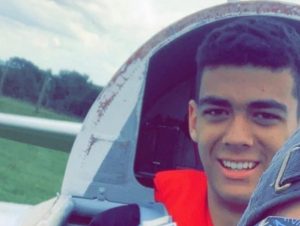 With Olly making great strides, but still hundreds of miles from home, his doctors decided the next step was for him to return to the South Coast. But with his condition still precarious, a road transfer over such a long distance was ruled out. Instead, the clinicians arranged for GNAAS to undertake the transfer.

Olly was driven to the charity’s base at Teesside International Airport and from there was flown to Southampton. The transfer was undertaken by GNAAS after the charity’s day shift came to an end. It meant Olly could be nearer to his family and friends and has been crucial in the next step of his recovery.

Caption: Olly being flown from Teesside International Airport to Southampton

Mrs Rastrick added: “Without GNAAS, I wouldn’t be saying any of this. We would have been arranging a funeral now instead. Olly would have bled to death before getting to hospital. We were told in the RVI that GNAAS saved his life, and the hospital allowed for his recovery. We have been incredibly lucky to have had both organisations there for us.”

It is hoped Olly will be allowed to return home over the next few days.