A man suffered life-threatening injuries when he chased his dog into the path of an oncoming car.

David Wilson, from Newcastle, has been described as a “miracle” after he survived the incident, which sadly resulted in the death of his dog, Sonny.

Sonny had scampered onto the road at West Moor, Newcastle, while the pair were out walking. Mr Wilson chased after Sonny but unfortunately both were hit by a car.

After intensive treatment on the roadside, Mr Wilson was airlifted to the Royal Victoria Infirmary in Newcastle where he underwent operations for his injuries.

The 37-year-old said: “I had fractured hips, so a brace was holding them in. A screw holding my leg on so that saved my leg basically.

“My clavicle was broken and I had my bladder put back together, so I had a number of different injuries. All in all I was in two hospitals for 70 odd days, so quite a long time.

“My recovery has been long, but it feels like it’s been the ideal recovery, if there is an ‘ideal’ recovery.”

Mr Wilson is still attending physio to build up his strength and recently visited the GNAAS base at Durham Tees Valley Airport where he was reunited with paramedic Colin Clark who was part of the team who flew to his aid. 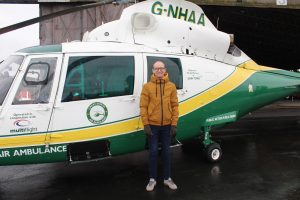 Mr Clark said: “We worked together with the ambulance service as a team to give David the optimal medical care.

“We decided to take David to the RVI via helicopter as the journey would have been a lot longer by road due to the Great North Run being on that day.

“He’s made a miraculous recovery and it’s good to see him doing so well.”

Mr Wilson added: “They’re amazing. The Great North Air Ambulance Service literally save lives. It’s such an in-depth operation and people seem to have a complete handle on what’s going on.” 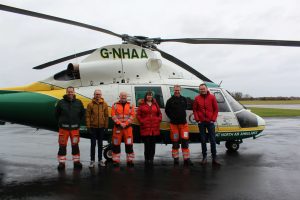 Since the incident Mr Wilson and his partner David Matheson have decided to take part in the Great North Run 5K to raise money for GNAAS, which is being held nearly a year to the day of his incident, which happened on September 9.

Last year GNAAS was called out 1062 times and needed to raise £5.1m. Please consider making a donation to keep us flying. Click here.

With the city of Newcastle congested with Great North Run traffic and road closures, the helicopter provided a quick route to hospital. But not before the GNAAS team and the colleagues in the North East Ambulance Service provided life-saving care on the roadside.