It turned out to be a busy start to the week for the GNAAS teams as they flew five times across the region on Monday.

Three people were injured when two vehicles collided on the A591 at Thirlmere.

GNAAS landed on the beach of the lake at 12.05pm, with the two doctors and a paramedic on board joining colleagues from North West Ambulance Service at the collision scene. The aircraft then repositioned to a site south of the lake which was more accessible.

After treatment on scene, one patient was then flown to hospital in Newcastle. The flight from Thirlmere to Newcastle took just 25 minutes. By road this would have been likely to take more than two hours.

Read more about the incident at the News & Star.

While that was ongoing, the charity’s team based at Durham Tees Valley Airport (DTVA) was called after reports of a motorcycle collision at Hemlington, Middlesbrough. The GNAAS critical care team – made up of two doctors and a paramedic – treated a patient on scene before accompanying him to hospital on a North East Ambulance Service vehicle. 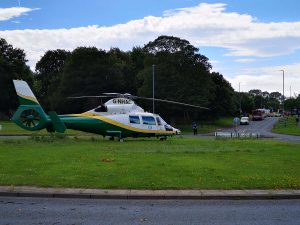 After the crews were stood down from incidents in Shotton, near Peterlee in County Durham, and Burnley, Lancashire, they flew to Grisedale Tarn in the Lake District.

Responding from Durham Tees Valley Airport, the team were called to help treat a patient injured in a fall in the remote area.

After treatment on scene, the patient was flown for further care in Middlesbrough. The flight took 26 minutes. By road, this journey would have taken more than two hours.

Grahame Pickering, chief executive of GNAAS, said: “It was a busy day but such days aren’t uncommon this time of year, sadly. As long as people continue to support us through donating and volunteering, we’ll be able to respond when we’re needed, where we’re needed. Thanks to everyone for making this possible.”