He suffered several injuries including breaking his neck in three places, his back in four, fractured his ribs, and ruptured his spleen and kidney.

Our doctor and paramedic team worked alongside Patterdale Mountain Rescue Team (PMRT), and a search and rescue helicopter from Prestwick to assess and treat Paul in horrendous weather conditions, before airlifting him to hospital further treatment.

GNAAS paramedic Jamie Walsh was part of the team that day.

Here he describes how everyone played a part in Paul’s survival. 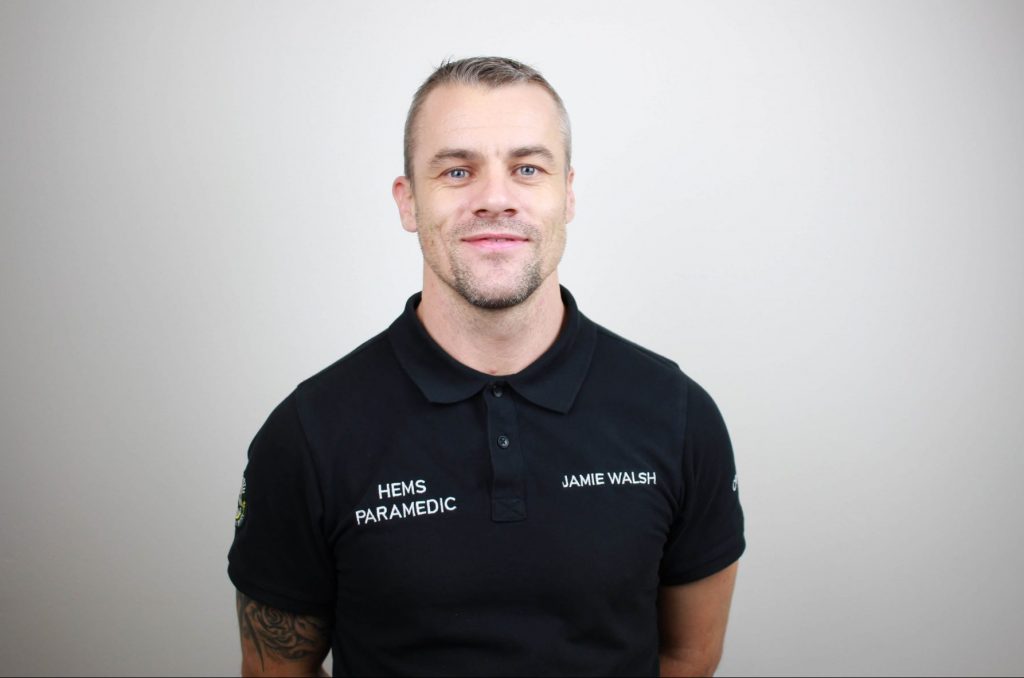 As a paramedic, working in a Helicopter Emergency Medical Service (HEMS) is the pinnacle of where you can go clinically. All of the patients that we go to are probably experiencing the worst moment in their life and you have the ability to change the outcome and make things a little bit better.

Working for the air ambulance, it puts you in a position where you are in a really high functioning team and it gives you the ability to do critical care interventions pre-hospitally that a road crew paramedic can’t always do. So, we’re very very fortunate to be part of that team.

The information we got about the incident was very limited. We found out that someone had fell off Striding Edge on Helvellyn and when you hear that, knowing that terrain and having climbed that mountain a few times, I know that the outcome of this patient is probably quite poor.

As soon as we got the call that this had happened, we launched immediately. The problem was the weather that day was horrendous. It was really misty, foggy and damp with low cloud, which meant when we got around the site, we couldn’t actually land on the mountain, so we ended up having to land at the nearby cricket club.

Just as we landed, we received further information that the patient was seriously unwell, he had a reduced level of consciousness, a really significant head injury and chest injuries.

We knew that this patient needed our help and needed the critical care interventions that we, and only we, could provide. 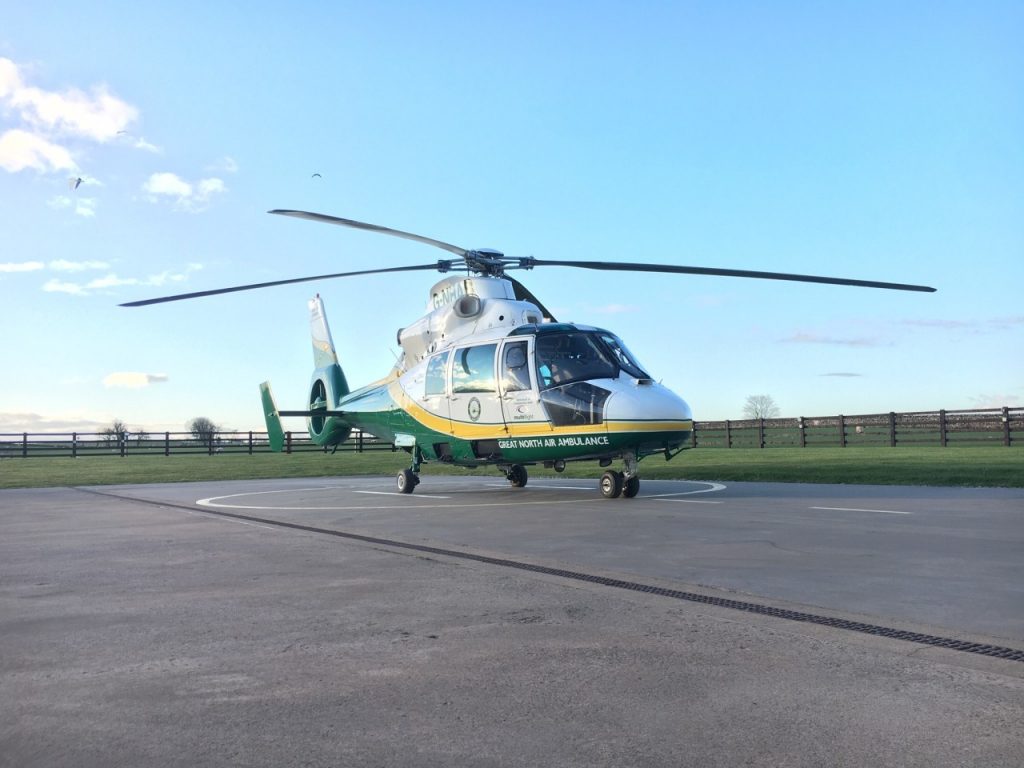 So, at that point, myself and Dr Mike Davison made the decision that we were going to have to hike up Helvellyn with all of our medical kit, in the hope that by the time we got there he was still alive.

Since I’ve been there a few times, not just walking it, but also at work with the helicopter, you get an understanding of where they’ve probably fallen as well.

That was the case here, and we had good information from PMRT as well.

There were alarm bells ringing when PMRT said that his conscious level was starting to decrease, he was starting to become more agitated, we also got told that his oxygen saturations were at 75% which isn’t adequate to perfuse the brain and the major organs of the body adequately.

So we knew that this gentlemen would need an anaesthetic at scene and he would need to be managed effectively, so we could control his breathing and subsequently control the oxygen delivery to his brain.

It took us approximately an hour to get to him. It was a really tough hike, and when we got to the top we knew we’d hiked up one of the tallest mountains in England. It was hard work but the incentive to get there and make sure that Paul gets the treatment that he needed was the motivating driving factor to make sure that we didn’t stop and we just kept ploughing up the hill.

This incident highlighted the importance of having a certain level of fitness for this job, because you just never know what situation you’re going to be in and in this case if we couldn’t make that hike in that time, Paul wouldn’t have made it. 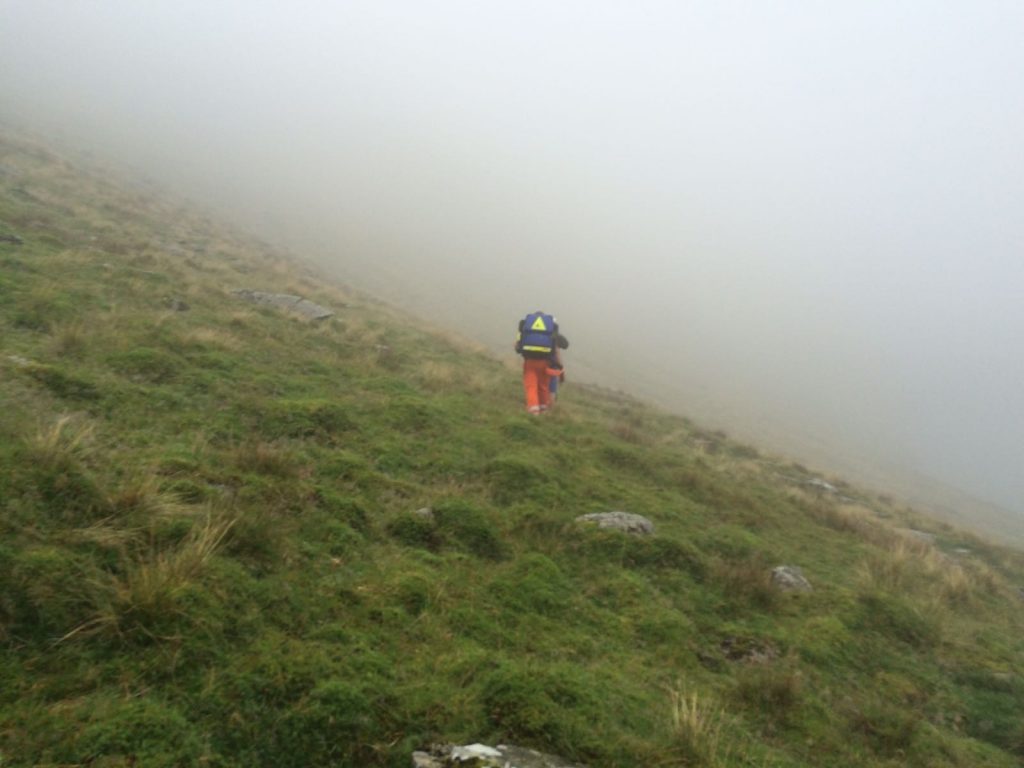 When we reached Paul, PMRT had got him packaged onto a sledge stretcher and wrapped him up in a blanket.

It was really cold, wet and windy, and Paul was still on a steep slope just to the side of the tarn of Helvellyn.

We could see how agitated he was, the blood coming down from the wound on his head, and obviously his oxygen saturations were really poor.

When you exposed him from that blanket you could see from his chest that he wasn’t really breathing effectively.

At this point we had to make some quite big decisions because this person needed an anaesthetic but the problem was, did we have enough oxygen to hike him down to the bottom of the hill, or could we manage to anaesthetise him and get him below cloud and try and get him medevaced by search and rescue.

We decided to hike him down to a place a little bit flatter and see if we could break cloud and try and anaesthetise him somewhere where we could get lifted by search and rescue.

When we got down to the tarn, Paul’s pulse started to slow and his breathing became a lot worse and he started to develop a tension pneumothorax.

This is where the side of your chest fills up with air, collapses the lung and then compresses on the heart, which then in turn means the heart doesn’t beat effectively, and it also massively impacts on his breathing.

At this point Paul was dying. Although we had limited oxygen, we knew we could get some hiked up from other PMRT members and we hoped we could get below cloud and get winched up or picked up by one of the search and rescue helicopters.

We suspected he was starting to tension, his breathing changed significantly, and he started to almost have this air hunger, and you can hear it, and it’s not a particularly pleasant sound and you know we needed to do something immediately otherwise he was going to die.

We anaesthetised him and then did a thoracostomy which is where we make a little incision just at the side of the chest using a scalpel and then we dissect that muscle with some blunt forceps and then it’s a case of sticking your finger in the hole to make sure we could feel the lung inflate and the air release from that chest cavity.

We’re doing these procedures in a hostile environment and trying to maintain some form of core temperature while doing them, so it is difficult, it is challenging, but in this case Paul really needed that intervention otherwise he wouldn’t have made it.

Because we were able to manage the tension pneumothorax and manage his breathing effectively his oxygen saturations came up, his heart rate came up, and the situation started to look a lot brighter. There was a real sense of relief around the team because we had much more control over the scene, however we needed to keep up our momentum and maintain our vigilance because he could still tension and deteriorate.

Once the anaesthetic was done we sent some of the PMRT further forward to find a landing site, and they actually came back and said we’ve got a couple of hundred metres trek but there’s a potential site where we can get the search and rescue helicopter in. 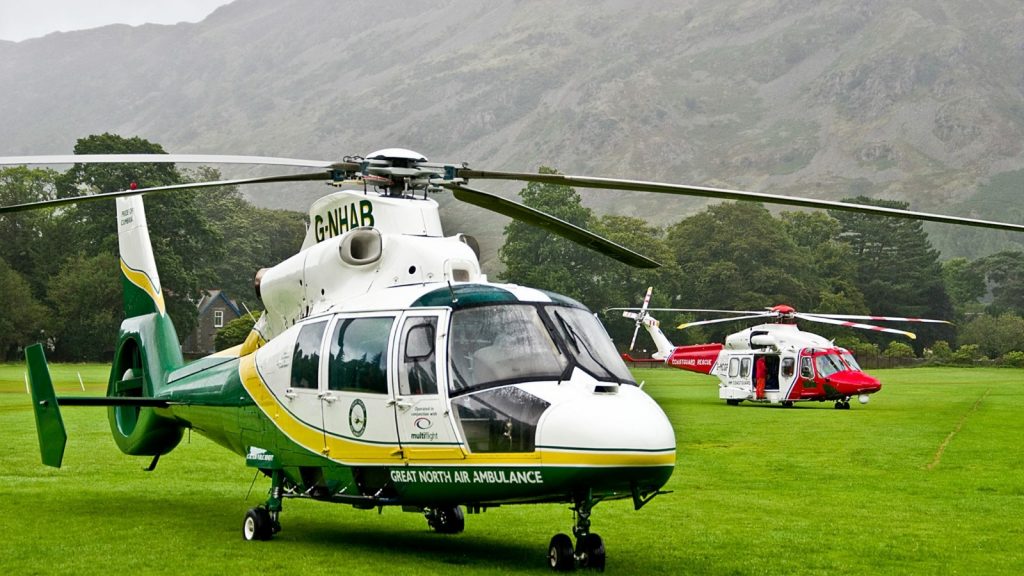 Moving Paul was really difficult because you’re not only concerned about the patient’s current condition, but you’re moving him over unsteady terrain, the last thing you want to do is make any of his injuries worse.

I remember the PMRT light up the flare just as the helicopter came into view and you do get that sort of ‘we’re getting out of here now’ which means we’ll be in hospital probably within the next 40 minutes which is quite comforting. You know that, that’s the time I’ve got to manage this patient, so then you start thinking about the planning, the drugs you’re going to need for enroute to hospital, the sedation, and the paralysing agents that you’re going to need for that timescale. 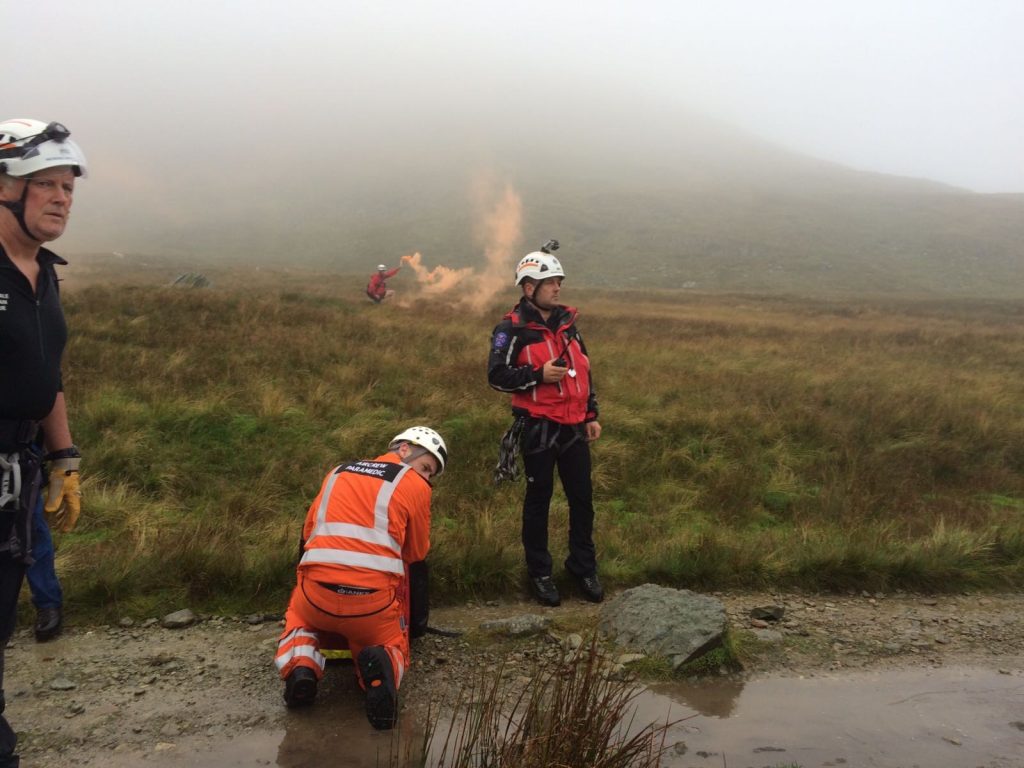 In our region we’ve got three major trauma centres, unfortunately two of them are on the east coast, ones on the west but it’s a bit further south, so we knew we were going to the closest one which would be the Royal Victoria Infirmary (RVI) in Newcastle.

On those type of journeys our priority is to maintain vigilance and continuously reassess Paul.

Just because we dealt with the tension pneumothorax doesn’t mean it won’t tension again.

When we get to hospital, they’ve been pre-alerted so they’re expecting us and when they hear that someone’s fallen 200-300 feet off the side of Helvellyn they’re expecting significant trauma to this patient, of which he had. 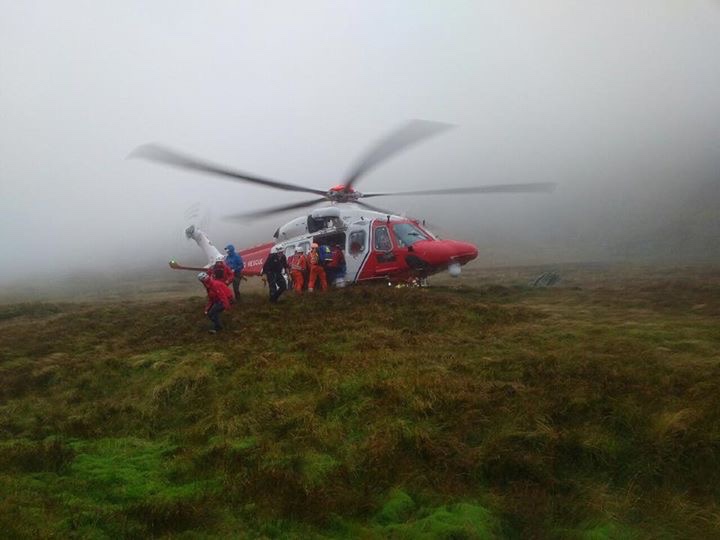 When we arrive in hospital in the emergency department (ED) there’s maybe twenty to thirty people in resus waiting to accept this patient from us, but it’s very quiet, it’s very professional, it’s a great place to take these patients. They all know their role incredibly well and when we arrive in it’s silence while the handover’s given. Once the handover is given, the ED consultant will take over and then they’ll prioritise the next treatments.

Reflecting on the incident

On that day, a lot of things lined up, with regards to the whole continuity of care right through from the first person arriving on scene right the way through to getting him in the theatre, so you can’t really speculate on what the outcome’s going to be. We do find out but all we can hope for is that we delivered him in the best possible condition to give him the best chance possible.

We train really hard every shift, and throughout the year you put a lot of work in to make sure that when you get to these patients it becomes second nature and you just do your job and it was one of those moments to think it’s all been worthwhile and a lot of hard work paid off to give him the best chance to survive.

It’s a job that will stay with us. It’s one of those ones where if any of the teams hadn’t got to Paul in time he wouldn’t have made it and if the interventions that we had been able to provide didn’t get done he wouldn’t have made it. If search and rescue hadn’t been able to pick us up off the mountain it would have been incredibly difficult. It was a pretty special job to be a part of, just because there was so many people pulling in the right direction to affect the outcome of the incident.

It’s that chain of survival, right the way from the start right the way through to theatre to rehab to recovery and the outcome’s fantastic. It’s what we all do the job for.