An air ambulance crew battled high winds to rescue a grandfather who was having a heart attack in rural County Durham.

Peter Jefferson was at his cottage in Middleton-in-Teesdale on 7 October 2018 when he became seriously unwell. It transpired that the 67-year-old was having a heart attack. Luckily, he was not alone.

Mr Jefferson’s granddaughter Emma had stayed the night and was being picked up by her father Ian when the drama unfolded. 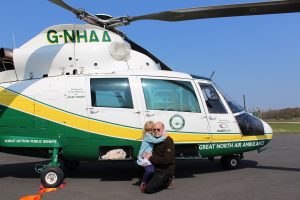 Mr Jefferson said: “Ian called 999 and went to get the defibrillator in the local village but by the time he came back there was already a paramedic on scene who came in his car so we didn’t end up using it.

Mr Jefferson said: “The helicopter couldn’t land nearby because of the conditions so there was a short transfer from the land ambulance to the air ambulance.

“I don’t remember much after that, apart from that it was a bumpy ride to James Cook.”

Before transferring Mr Jefferson, the charity’s doctor and paramedic critical care team had stabilised him before working with the North East Ambulance Service crews on getting him into the aircraft with as little discomfort as possible.

GNAAS paramedic Andy Dalton, who treated Mr Jefferson, said: “Peter was in a remote area having a significant heart attack so the quicker he could get to the definitive treatment the better.

“En route we helped manage the pain he was suffering and continually monitored him in case he deteriorated.

“We took him to the specialist cardiac centre at James Cook University Hospital for Percutaneous Coronary Intervention, which is a non-surgical procedure to place a stent in an artery.”

Mr Jefferson said: “I was in hospital for three days and was operated on as soon as I got there. I’m fine now and back to normal.”

Mr Jefferson recently visited the GNAAS base at Teesside International Airport with Emma and his wife Mary and were given a tour of the helicopter by GNAAS pilot Jay Steward before watching it take off on a mission. 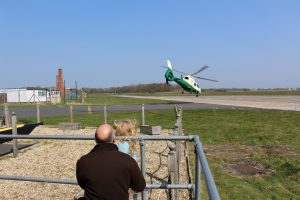 Mr Jefferson said: “The Great North Air Ambulance Service are fantastic. I am very conscious of the fact that this service contributed to saving my life.

“I really enjoyed my visit to the base. Everyone does a great job.”