The Great North Air Ambulance Service (GNAAS) always has a doctor on board its aircraft enabling the team to carry out advanced procedures on scene. But, when they aren’t flying, the doctors work at hospitals across the North.

Holly Taylor, who works in public relations at GNAAS, followed one of them on their day job. Here’s her account of the day….

It was 8.45am at Whitehaven hospital in Cumbria and I was just about to start my shadow shift with GNAAS doctor, John Ferris.

As I walk to meet John, I pass different sets of doors, all with hand-sanitiser dispensers and boxes filled with face masks outside. My shoes squeak on the polished floor, the corridors are stuffy with oversized prints hanging side by side and that distinctive smell hits me – sterile and clinical. For many, a memory more than a smell.

From cardiology to maternity. I bypass them all, because today, I am heading for the emergency department (ED).

John has been working in emergency medicine since 2007. Not only is he a doctor at GNAAS, he is also a consultant and lead clinician for retrieval medicine at North Cumbria Integrated Care NHS Trust.

What did I expect? Who knows? I still had very little insight into what it really meant to be on the front-line. What I did come to know though, was that from the first patient, the first stitch to the last resuscitation attempt, when it comes to emergency medicine no two shifts are alike.

John gives me a warm welcome – a friendly face, a face that would undoubtedly make me feel more than comfortable in his care. John told me he had come in earlier that morning to finish a backlog of work as he sipped his now lukewarm (at best) coffee. Little did I know then, just how much earlier he would have to come in most days to balance his workload, as well as three specialist jobs and being a husband and father. 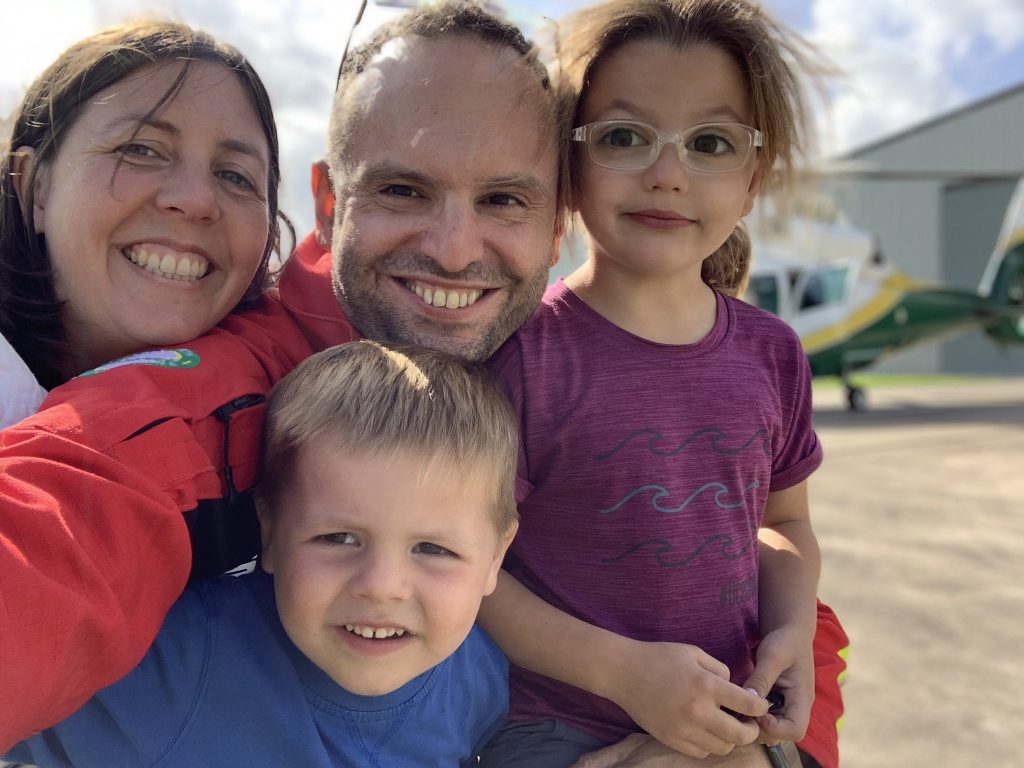 It was 9am and time for the handover from the night shift team to John and his team. John is the consultant in charge today and the team is reeling after a traumatic case came in the night before. John reassures the team: “It really was an unfortunate incident, and if you all need to talk about it, feel free.”

I am hit with the realisation that doctors have been taught to exhibit superhuman empathy but in reality, these people aren’t superhuman – they’re just like me and you.

As an outsider looking in, I have often romantisied about what it must be like to be a doctor at that level, but I had already realised that the job isn’t always exhilarating. It was easy to see that there were also frustrating and disheartening shifts where a large amount of time could be spent dealing with difficult patients, overflowing waiting rooms and endless paperwork.

It’s a little after 9am, and I am led into the clinic for complex wounds, stitches and repairs. In this clinic, the decisions will be made on whether a patient needs to see a specialist or needs transferring.

Each patient we meet immediately warms to John, looking to him for all the answers.

He said: “Every clinician is different – I work on rapport first. It’s about proving to the patient that you know what you’re talking about and that you are a good doctor and a trustworthy guy.

“It is so important how a patient perceives you. Junior doctors can often rush into the medicine when really it’s about linking with the patient.” 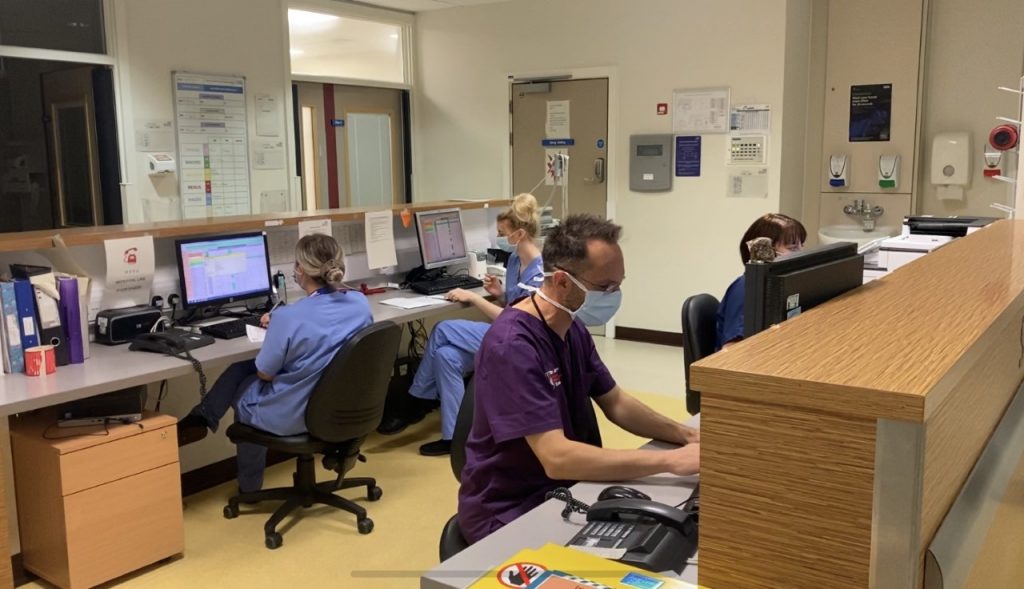 We head into a small treatment room where a young man is resting his arm on the bed and his thumb points in the air. I double-take as I realise the top half of the thumb is missing…

It’s midmorning and John is chatting to clinical director Dr Craig Melrose, who he introduces to me in a whisper as his boss.

Later, Dr Melrose tells me: “John is a super clinician, I have been working with him since January and he is a fantastic example to juniors and in the development of their skills. He really is amazing.” 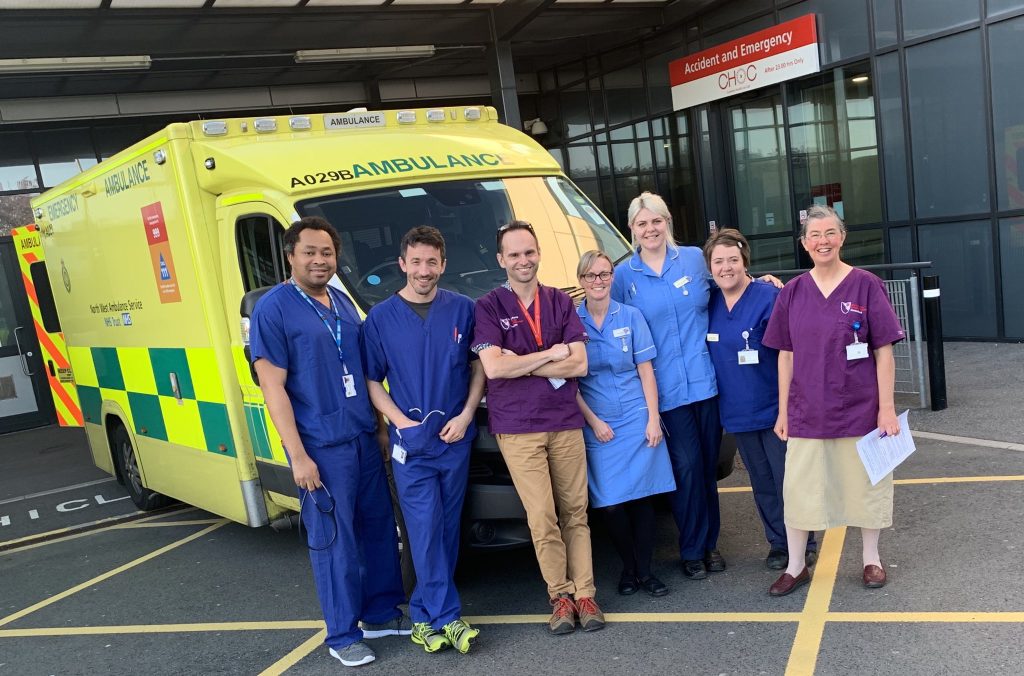 From one room to another, I prepare myself for the next patient who has a nasty burn from a motorbike exhaust.

“Don’t worry”, John tells him, “that green stuff is actually a barrier and is your new skin forming. It isn’t puss – think of it like scaffolding with a cover on.”

My knees go weak, if I could barely handle looking at the ‘green stuff’, how was I going to handle a major trauma coming in later in the day?

A little after lunchtime (a lunch break that John didn’t get), a six-year-old girl appears in the major trauma paediatric unit after having a seizure. The waiting room is a lot different from the room beside it. The room is bright, and the walls are colourful and welcoming with as much personality as John himself.

Her parents thought what started off as thrashing and laughing because of ‘holiday excitement’, had turned into something a lot more serious.

John introduces me to the girl: “This is my friend Holly”. Her mum tells us she’s a twin and her sister is healthy with no similar symptoms. The little girl then opens up and adds that she also has a brother – “oh no, I am so sorry about that”, adds John with a smile on his face…

John says afterwards: “The great thing about working in a hospital is that two days are never the same. We finish our clinic in the morning and then move onto seeing the patients that come in and supervising our team of doctors and nurses.

“Today, we’ve seen some patients with minor injuries, a broken wrist and a young girl who may have had a strange type of seizure which will need investigating. It’s important to be able to switch between patients.

“In Aberdeen, where I used to work everything was on one site. You could depend on other specialities and departments to help but here, you can’t do that. There’s 100,000 people that live here and because it is so remote, this hospital is so needed.”

It was early afternoon in the Whitehaven Emergency Department, and it was really starting to get busy. John said: “There’s large numbers of patients coming in who are quite unwell and with complex injuries. The job of a consultant at this point is command and control.

“It’s about making sure the right patients are being seen in the right order and identifying the patients that need to be seen quickly with little time delays then looking at alternate pathways to allow patients to go to other parts of the hospital.” 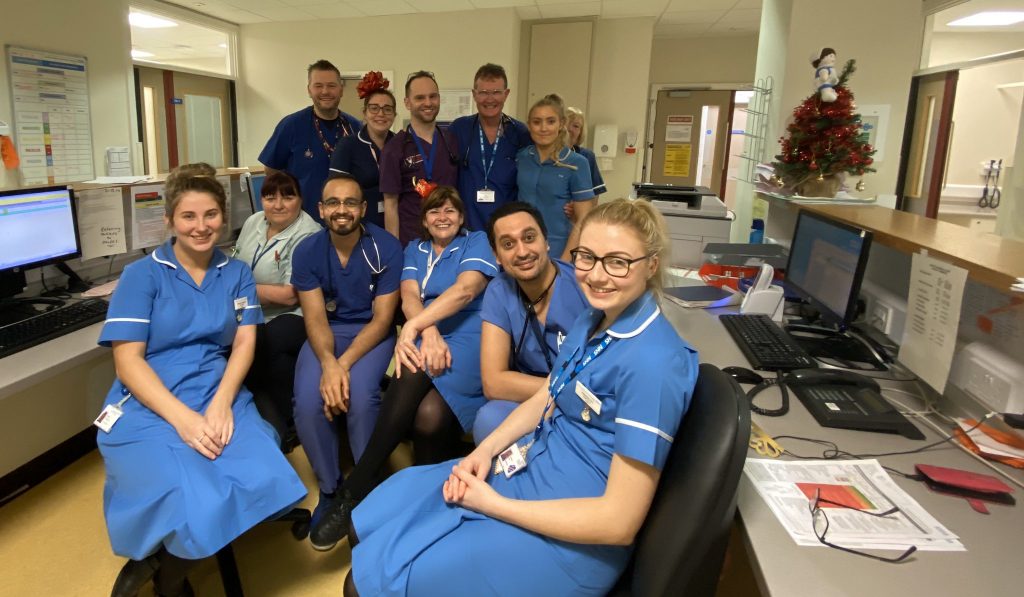 At around 3.30pm, John is told from a nurse that a man in his seventies, who’s fit, well, and independent, has come into A&E after struggling to go to the toilet followed by feeling tingling pains in his legs. After looking at his scan, John tells me that he has lung cancer and with his symptoms, there’s a high chance it has spread to his spine.

It’s hard to imagine that coming in with such a simple complaint could turn out to be something so heartbreaking.

John told me: “You need to keep your mind open to any potential when it comes to patients. The fatal flaw in any doctor is to set yourself up on an idea and stick to it.

“You can’t afford to focus on ‘x’ – this isn’t job done. For anybody in hospital, the principle is the same as the helicopter. It’s a snap judgement whether this patient is really well or in a bad way. From there, it’s a different thinking mode for each one.”

For John, this shift on the ED has been ‘relatively quiet’ but I can’t help but still feel exhausted. John told me: “I don’t like to use the word quiet in A&E, but everything today has so far gone to plan. However, that can all change in the blink of an eye.

“It doesn’t always go well in the ED and sometimes I can be in a situation where I give families bad news. It’s not one of the parts of the job I look forward to but looking after family and relatives in some ways is more important than looking after the patients.”

John’s job with North Cumbria NHS integrated care trust involves working both as an emergency medicine consultant and a pre-hospital consultant at GNAAS. It is clear to see from the shift I have shadowed that it is a great partnership between the two organisations. 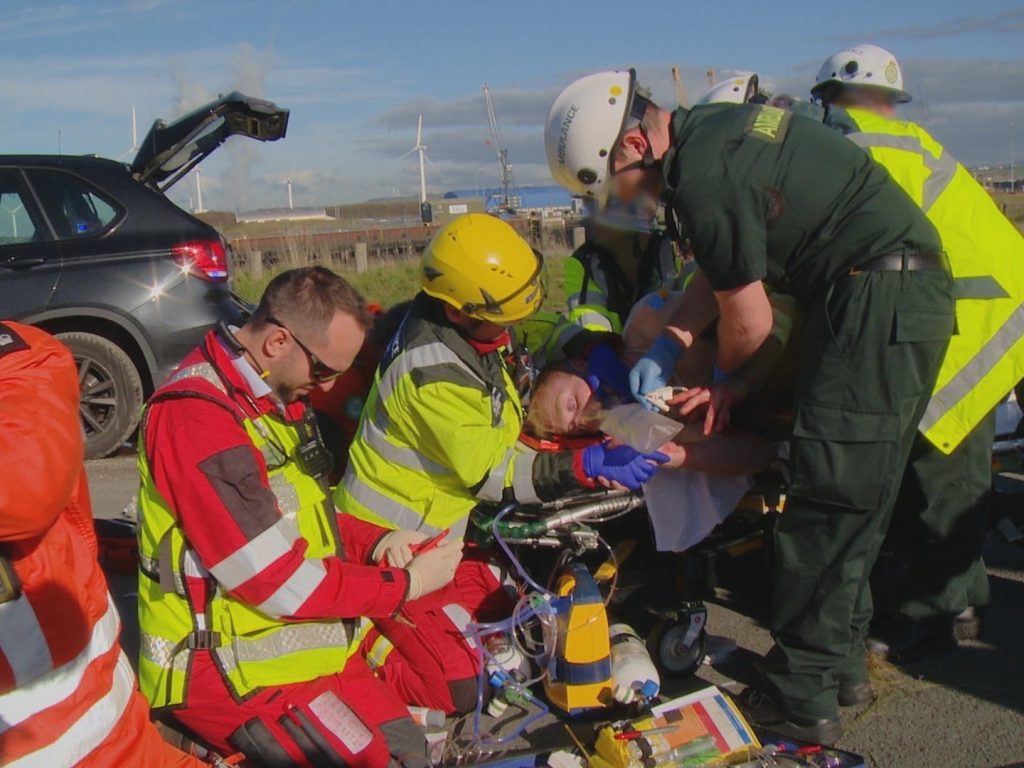 He says: “These jobs allow a clinician’s skills to compliment each other. Working remotely in a very small hospital requires a fairly broad range of skills and the links with the helicopter in terms of the hospital gaining support from GNAAS.”

I had come to appreciate just how much passion John has for his job, team, and patients.  Lindsay Hipkin, a healthcare assistant who regularly works with John said: “He is just amazing – absolutely fantastic. He’s an asset to the team and is always doing his best to bring around change to the department for the better.” 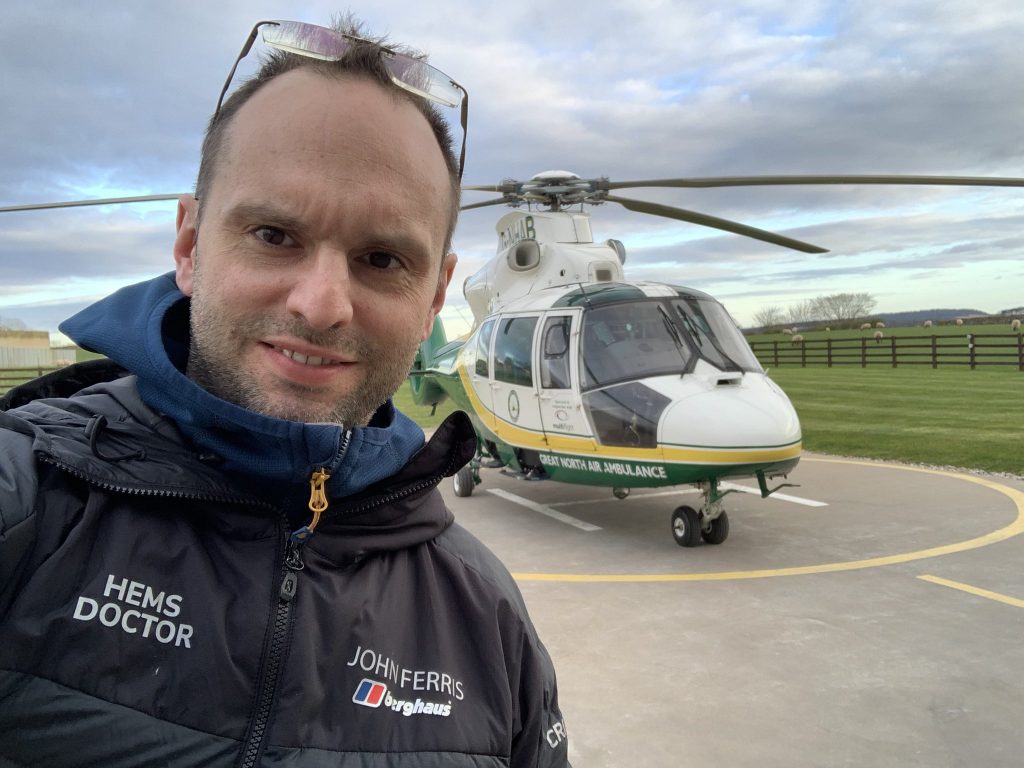 As my day came to an end, having even a partial grasp on the “big picture” around how an ED works, really made me appreciate the work John does for GNAAS more so.

My first experience in that environment was eye-opening. The more I learned about the challenges present in modern medicine, the more I appreciated just how much work the dedicated doctors at GNAAS must do, as well as balancing their work on the helicopter and time with their families. Not superhuman? Well, maybe just a little…