A farmer who was crushed by 600kg hay bales has returned to work on his farm after recovering from severe limb and hip injuries.

Recalling the incident, which happened in August last year, Mr Orpwood said: “I lay on the floor and said I’ll be alright in a minute and then the chaps tried to move me.

“Luckily I was with someone and I wasn’t on my own which quite often happens in farming.” 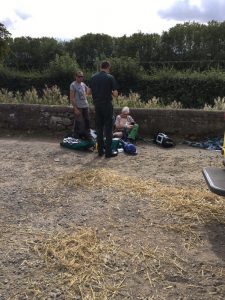 Mr Orpwood said: “Once the air ambulance arrived, because there was a doctor onboard they were able to give me a much stiffer painkiller than the ambulance could.”

After administering advanced pain relief, GNAAS airlifted Mr Orpwood to the Royal Victoria Infirmary (RVI) in Newcastle, where he received further treatment for his injuries.

Mr Orpwood faced a four and half hour operation to fix his hip, ankle and pelvis and then spent a further two weeks recuperating at the RVI.

He is still recovering from his injuries but has managed to get back to work on his farm, and recently paid a visit to the GNAAS base at Langwathby to thank Dr Sebastian Bourn and paramedic Terry Sharpe for their help on the day. 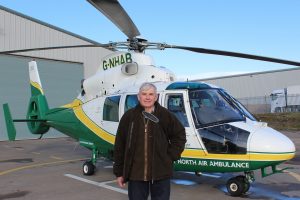 He said: “Meeting Seb and Terry was terrific. I was really determined to come and say thank you very much, because I think the air ambulance is the most wonderful service, particularly where we live in North Northumberland.

“It took 15 to 20 minutes to get from the farm to the RVI. If we’d gone by road it would have been certainly well over an hour and I’m just so grateful for what they did for me.”

Dr Bourn said: “Simon was unfortunate enough to have two very heavy straw bales fall on top of him. He had suffered a significant injury, was in a lot of pain and couldn’t be moved.

“We administered advanced pain relief before airlifting him directly to a major trauma centre for further assessment and treatment.

“It was great to meet Simon again at the base, under much better circumstances. I was very happy to hear that after lots of surgery and rehabilitation he is back working on the farm again.”

Since the incident Mr Orpwood and his wife Caroline Orpwood have donated £2,500 to GNAAS from their charitable trust.

Last year GNAAS responded to hundreds of call-outs and needed to raise more than £5m. To find out how you can help, please visit www.gnaas.com or call 01325-487263.