A COUPLE who suffered serious injuries after being involved in a head-on collision on the A1 will feature on a national television documentary this weekend.

The couple were driving to a wedding in Topcliffe, North Yorkshire, from their home in Glenrothes, Scotland, when the incident occurred.

The collision happened on 30 August 2018. It left Marjory with a broken foot, but she was able to get herself out of the wreckage.

Her husband was not as lucky. He was trapped in his vehicle for more than an hour while firemen cut the roof off his car. 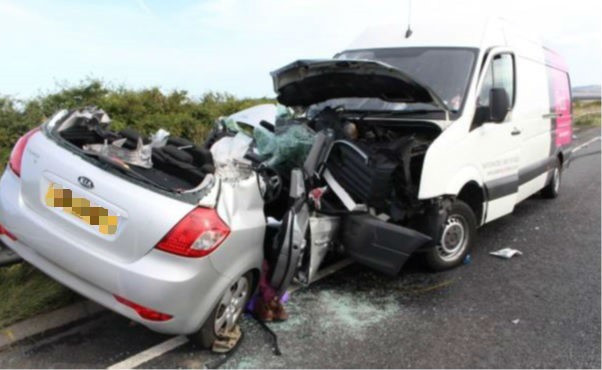 The Great North Air Ambulance Service (GNAAS) critical care team flew to the scene and administered advanced pain relief to John, who had a double fracture to his right femur and three fractures to his pelvis.

John was airlifted to the Royal Victoria Infirmary (RVI) in Newcastle where he underwent an eight-hour operation to put a pin in his leg.

After spending two weeks at the RVI, he was transferred to the Victoria Hospital in Kirkcaldy where he stayed for six days before finally returning home.

John and Marjory have since visited the GNAAS base at Teesside International Airport where they met pilot Keith Armatage who flew him to the RVI on the day of the incident.

Speaking at the base, John said: “It’s been brilliant coming here today, meeting Keith and the rest of the crew, we’re so grateful for them, they did a fantastic job at the roadside, and kept me relatively pain free. I think Marjory and I could never thank them enough for what they did.

“I’d like to thank the pilots, paramedics, doctors, the ground crew, volunteers and fundraisers for keeping this superb operation in the air. I’m just so grateful.”

The story will feature on Emergency Helicopter Medics this Sunday (19 January) at 9pm on More4 and then available on demand.