Why two cyclists covered 150 miles on a 75 mile route

After the announcement that the 150 mile route of the GYRO wasn’t taking place due to unforeseen circumstances, Carl Malia and Graham Bone were determined to still cycle 150 miles after fundraising at work. They said “they would never have lived it down!” if they hadn’t done the distance, so that’s what they did, and here’s Graham’s write up of their experience.

“Who’s idea was this!” was the tongue-in-cheek question on both our minds as Carl and I left Durham at 6:00am on Saturday morning to head to Progress House, the Eaglescliffe base of the GNAAS, for the start of the Velo29 organised GYRO sportive. While 6am was an early start, if all had gone to plan, we would have actually been setting off from Progress House at 6.15am on the bikes for the Base-to-Base 150 mile route.

Things hadn’t gone to plan however, and when the team from Velo29 were putting out the signage for the route they unfortunately found out that a key road would be closed for resurfacing. Unfortunately, with no easy alternate route, all 150 mile entries were then to be converted to the 75 mile Challenger route.

As we had been raising sponsorship for the GNAAS, we both felt that we had to still complete 150 miles on Saturday. So, with the support of Velo29, we planned an alternate route and agreed to set off at 7am.

At the allotted time, we headed off into a chilly but clear autumn morning and started to make good progress. So good in fact, that we happened to miss a sign and ended up having to make a bit of a detour to get back on course! This wasn’t a problem as our planned route was ‘only’ 120 miles so we would need to add extra in along the way anyway.

Back on course we quickly arrived at Barnard Castle, to the Bowes Museum feed stop. It was a fantastic setting, and as we’d started a little earlier than the 75 mile participants we had the place to ourselves. With the sun now out properly, we took off our top layer and headed off for the next leg of the ride.

This took us up Stang Lane for the first proper climb of the day. The descent to Langthwaite was picturesque even with having to take avoiding action when a sheep decided to cross the road!

Just before Langthwaite, we headed West away from the 75 mile route. And what would have been 9 miles to the feed-stop at Reeth, was now going to be 52 miles.

Unfortunately the weather wasn’t with us, and we had a strong headwind up the valley and up Tan Hill. This turned to rain and what felt like some hail as we descended towards Keld in the Swaledale Valley. Then it was back into the headwind for the next ascent before dropping down to Nateby.

We added a couple of extra miles to our route here by heading into Kirkby Stephen for some well earned food and to recharge before heading East again.

As it always seems, the wind felt like it had turned when we did, but I think that was just the miles in our legs at that point. The rain decided to make another appearance however, but luckily it was only a brief shower.

Some relatively quick miles from this point took us towards Hawes, and ultimately we headed up the Buttertubs climb. This climb had been on our minds during the ride, however it turned out to be much nicer than we thought, and the views up the valley as we approached the top made it more than worthwhile.

Dropping down back into the Swaledale Valley it was a good run into Reeth at our 100 mile point and on to the Dales Bike Centre for what was the second official feed stop. By the time we got there, as expected, all the 75 mile riders had already been through . The staff there were great however and had saved us some provisions. The warm tearoom to sit in was an added bonus!

Mentally, we thought we were virtually finished at this point as we knew there were only really two ‘bumps’ left to climb between Reeth and Richmond and it was going to be flat from there back to Progress House.

We should have paid more attention to the elevation profile for the route however as these ‘bumps’ turned out to be real climbs out of Reeth and then up to Marske.

With those completed, we made good time back to Progress House to catch the staff and let them know we were ok. Unfortunately, we hadn’t quite finished however. We’d managed to turn the 120 mile route into 136 miles, but we were still short of our target. So, we headed back out into what was now turning into proper darkness and kept riding until the magic 150 mile number was shown on our cycle computers!

It was an epic ride, raising money for a fantastic charity, and we both thoroughly enjoyed the experience. We can’t wait to do the ‘proper’ 150 mile route next for next years GYRO! 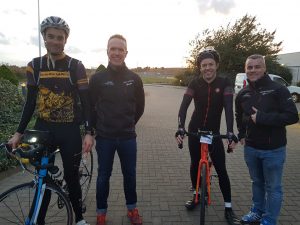