“My right leg was shattered below the knee, my left leg was also snapped, I had a broken rib and shoulder blade and a broken hand but luckily, I kept my good looks.”

A Cumbrian man said his outlook on life has totally changed following a collision involving his motorbike and a tractor which has left him with life-changing injuries.

Stan Wood from Alston had been visiting his mother in Penrith in September last year when the accident happened.

Stan said: “I thought I would go the scenic route and I was about two miles from Penrith when there was a nasty right bend in the road with two tractors on the other side.

“The first tractor turned in front of me, so I hit my brake, smashed into the tractor and bounced off it.” 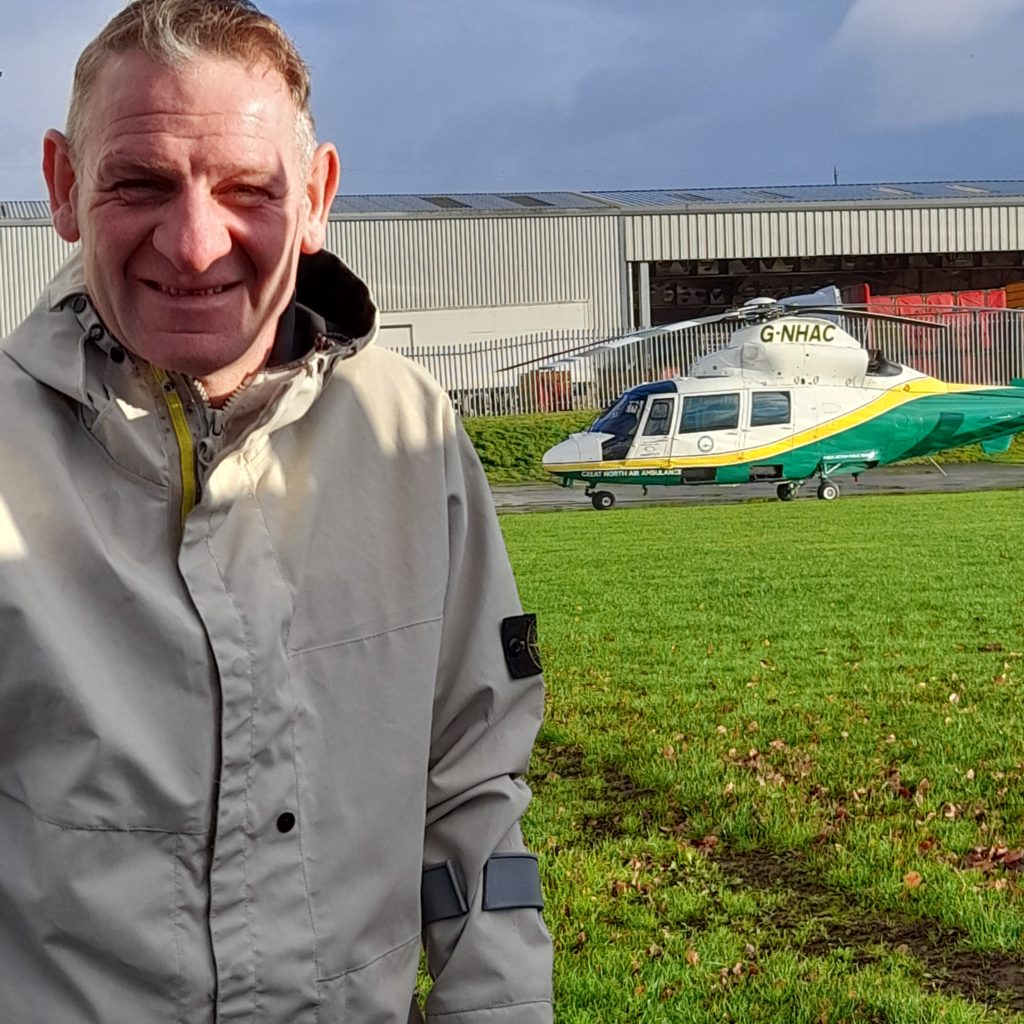 The 55-year-old recalls being conscious in the moments that followed the crash.

Stan said: “I was propped up against something and I just looked up and my bike was in bits and that’s when I also realised my leg was twisted back round behind me. It was completely buckled and smashed below the knee and bent up towards my head.

“The driver of the second tractor got out and ran over to help me. My helmet was off so the driver was holding my head up straight, but I knew he was so scared because I could feel him shaking.”

As the Great North Air Ambulance Service (GNAAS) flew to Stan’s side, he recalls having seizures and being told to stay awake by those around him. 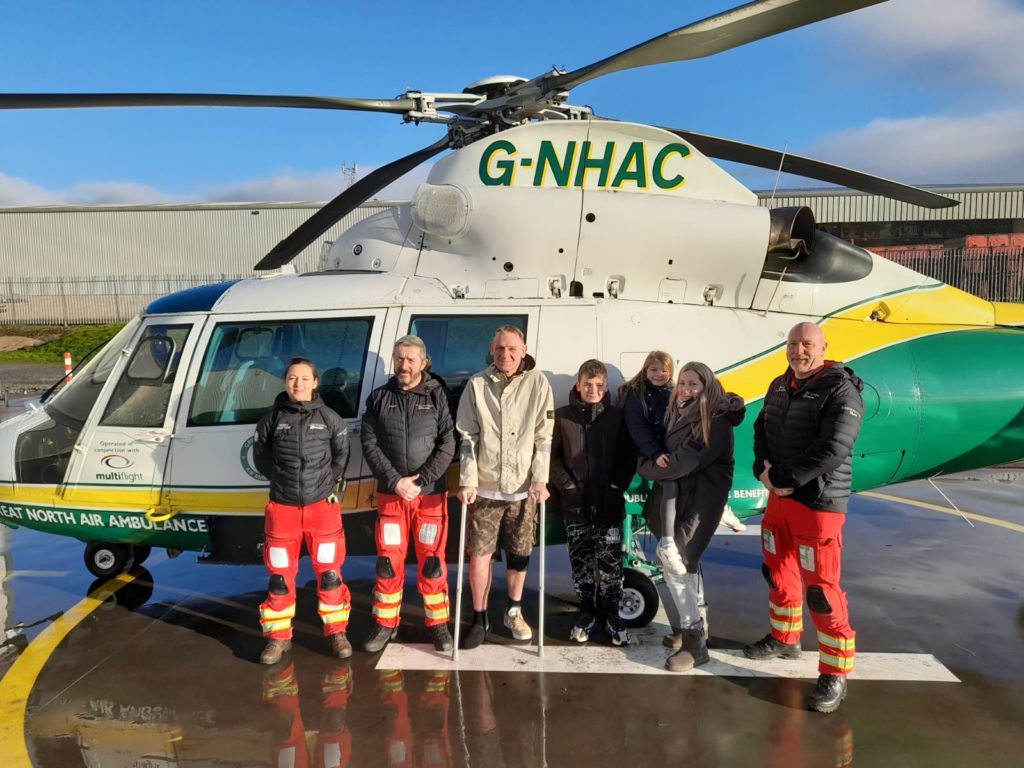 “I can’t remember the sound of the helicopter or GNAAS landing because I was screaming like a banshee and Terry Sharpe, the paramedic on duty gave me pain relief and said he was going to straighten my leg.

“The helicopter flight was the smoothest journey of my life.”

GNAAS, which operates the Pride of Cumbria II aircraft from Langwathby, flew Stan to the Cumberland Infirmary in Carlisle where he stayed for three and a half weeks. 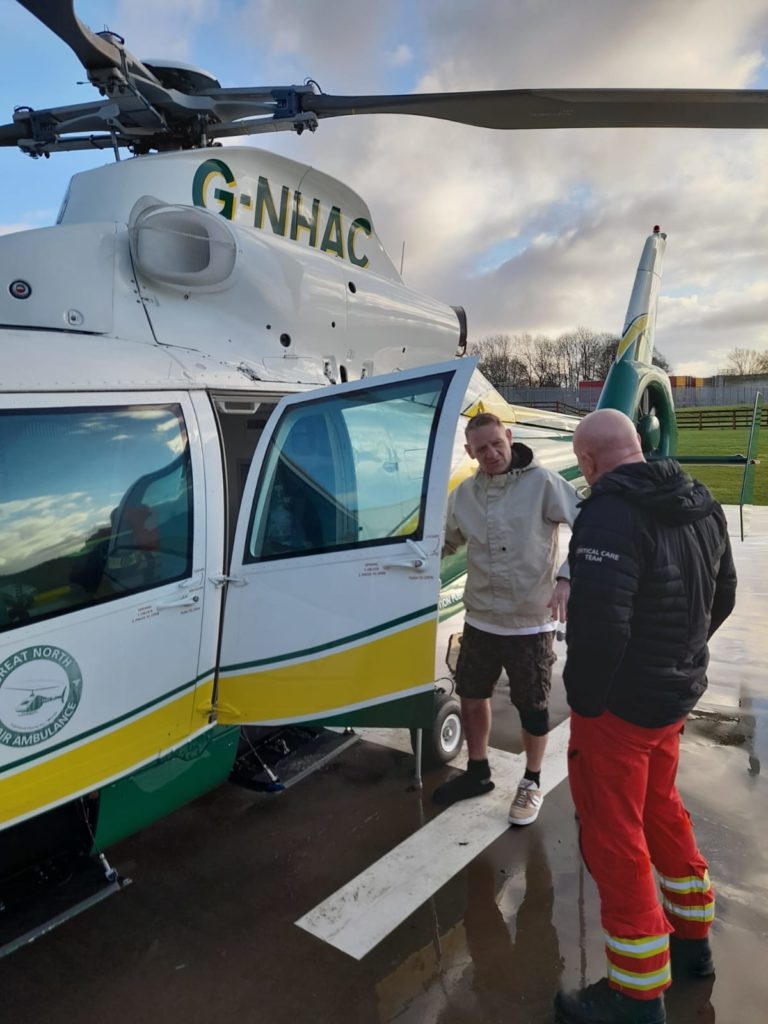 Stan said: “They practically took my right leg off and put it back on to get it straight again with rods, pins and bolts.

“It was shattered below the knee, my left leg was also snapped, I had a broken rib and shoulder blade and a broken hand but luckily, I kept my good looks.”

Stan added: “GNAAS is amazing, and the service is vital. If I had been going any faster, I wouldn’t be here.

“My outlook on life has definitely changed that’s for sure and I won’t be on a motorbike again. This this has shown me what’s precious in life.”