The rescue of a man who was impaled through the chest by a fence post featured in a national television series following our GNAAS critical care team.

This story contains graphic content unsuitable for some readers.

Richard Stephenson, 23, of Workington, was the passenger in his friend’s car when the vehicle went off the road and crashed into a fence in his hometown on 18 October 2018.

The driver of the vehicle didn’t sustain any injuries, however, Richard was not as lucky. A 20-foot wooden fence post had pierced through the passenger side of the car and impaled his chest.

The story features on this Sunday’s episode of Emergency Helicopter Medics, on More4, after a film crew followed the work of our critical care team for season three.

Dr John Ferris, who works at GNAAS, but who responded as a BASICS rapid response doctor, was one of the first to arrive on scene alongside the North West Ambulance Service.

He said: “As I approached the car I could hear Richard moaning away and began to feel reassured that he must have escaped serious injury.

“But as I came around the side of the car it became quickly apparent that this job was going to be that once in a career job where your skills are stretched to the maximum and beyond.” 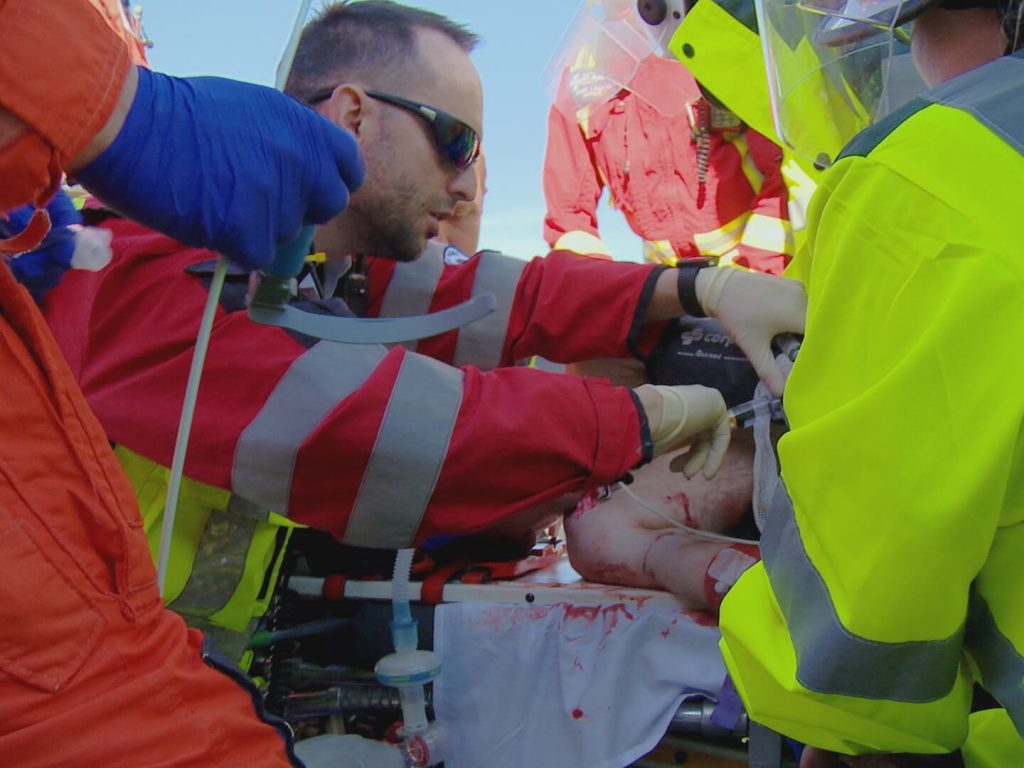 Richard, who was born in South Shields, was given ketamine and extricated from the car before further help arrived from GNAAS and the North West Air Ambulance.

GNAAS paramedic Andy Dalton had initially been at an incident in Carlisle before flying to Workington with the rest of the team.

He said: “Dr Ferris had already formulated a plan that he would need to be given a general anaesthetic at the scene so that we could treat the chest injuries he had suffered as the post had gone through his chest.

“There was a concern that Richard may require a blood transfusion, but we had already used our blood stocks at a previous incident.

“Therefore, the critical care team based at Teesside International Airport was asked to attend to bring extra blood should it be needed.

“Once the anaesthetic had been delivered, the bilateral thoracostomy procedure was performed on either side of Richard’s chest, which involves cutting a small hole to release a build-up of pressure, which if not done could have been life-threatening.”

Once Richard was stabilised, he was transferred to the aircraft and flown to the Royal Victoria Infirmary (RVI) in Newcastle.

Dr Ferris added: “I remember watching the helicopter fly away from scene thinking that it would be a miracle if he were to survive.”

At the RVI, Dr Jonathan ‘Doogie’ Howes, Consultant in Emergency Medicine, who also works as a doctor for GNAAS, was part of the team who delivered the ongoing care to Richard, once he arrived at hospital.

He said: “I made sure we had the necessary treatment and the right surgical teams ready for when Richard came in.

“Richard then underwent an operation to remove the wood, but he ended up losing part of his right lung. He then went into intensive care.” 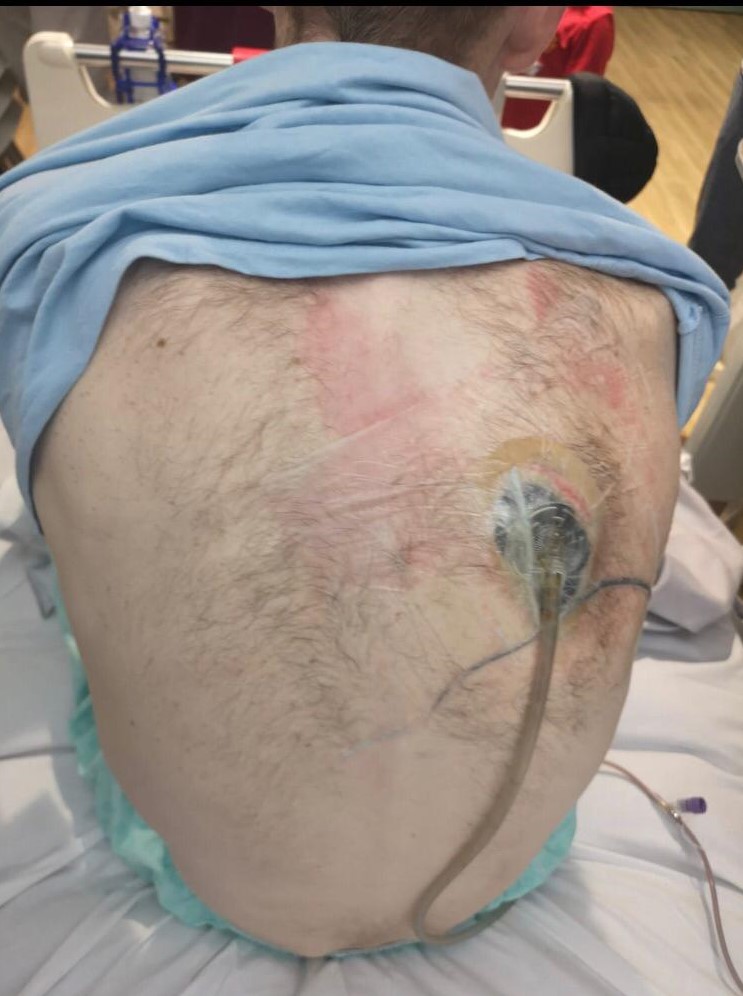 As well as losing a third of his right lung, Richard lost two parts of his bowel, had kidney damage, and sustained damage to his intestines.

After spending four weeks in hospital, he is slowly making a good recovery and credits GNAAS for saving his life.

He said: “If it wasn’t for the air ambulance I definitely wouldn’t be here.”

Emergency Helicopter Medics will be on screen this Sunday at 9pm on More4. 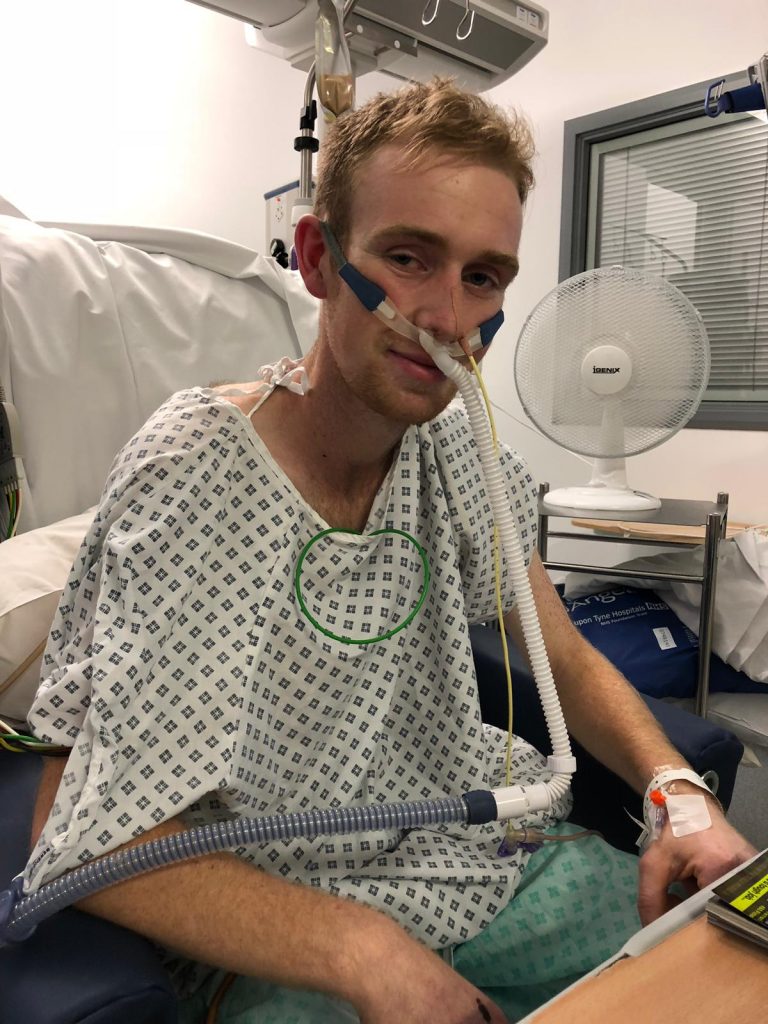