A YOUNG girl has raised more than £600 for the Great North Air Ambulance Service (GNAAS) after the charity saved the life of her mother following a serious car crash.

On 22 April 2018, Nicole Law’s mother Abi Law was in a car with her friend, when they were involved in a head-on collision with a van in Cambois, Northumberland.

GNAAS was called to the scene. Its critical care team assessed and treated Miss Law before airlifting her to the Royal Victoria Infirmary in Newcastle.

Miss Law discharged herself from the hospital after six days and moved in with her mother, along with her daughter Nicole.

Nicole was only four-years-old at the time and was by her mother’s side throughout the whole recovery process.

Miss Law was initially told that she might have to spend a year in a wheelchair, before using crutches to help her walk due to how badly her pelvis was broken, as well as the other bones that were broken.

However, she amazed doctors by walking unaided in less than four months and credits her daughter for helping her focus on her recovery.

Miss Law said: “At times it has been hard but I’m getting there. The bairn’s got us through it all really. I just get up and look at her face.”

To say thank you to GNAAS for helping her mother, Nicole asked her school to hold a non-uniform day, and also organised a raffle to raise vital funds for the charity. 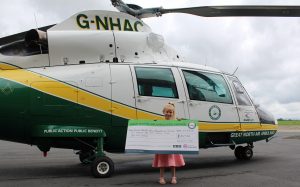 In total she raised £667.50 and recently visited the GNAAS base at Teesside International Airport with her mum, auntie Billie Law and uncle Stevie Flynn.

They met GNAAS paramedic Marcus Johnson who treated Miss Law and were given a tour of the air ambulance.

Miss Law said: “I know for a fact that I wouldn’t be here today without the support and help from the air ambulance. Even police and doctors have told us that as well. GNAAS are absolutely amazing in everything they do. Without a doubt.

“The visit was absolutely excellent. I’m so glad I’ve met one of the paramedics that treated me. I’m a lot happier now.” 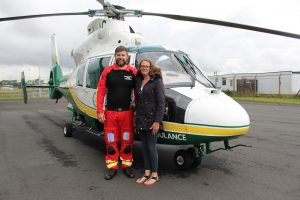 Mr Johnson said: “It was great to meet Abi again and see she has made a good recovery. I was also very impressed to hear her daughter Nicole had raised money for us and I was delighted to show the family round our base.”