THE patient who received the North’s first pre-hospital transfusion of plasma has left friends and family “flabbergasted” at his remarkable recovery.

John Beaumont was riding his Suzuki GSX-R 600 motorcycle on his way to work in Kendal when he was involved in a collision with a car which left his life hanging in the balance.

The father-of-two suffered horrific injuries in the crash, which happened at the junction of Windermere Road and Hollins Lane, Burneside, on May 27, 2016. John said he ‘t-boned’ the vehicle in the collision.

He was treated at the roadside by the Great North Air Ambulance Service (GNAAS) and was put into a medically induced coma by the doctor-led team. One unit of blood and one unit of plasma were administered. This was the first time plasma was used by the aircrew after the charity launched a trial of the pioneering pre-hospital treatment just days before.

GNAAS paramedic Andy Dalton said: “When we arrived, John was laid next to the car. When we see a motorcyclist like this, we know that the patient has absorbed all of the energy from the collision.

“Often, when riders are thrown in the air, this diffuses some of the energy which means they stand a better chance of survival. John had hit the car and stopped, taking the full impact, which means all the energy went into his body. This can – and did – cause catastrophic injuries.”

John was flown to the Royal Preston Hospital where he spent four weeks in a coma. 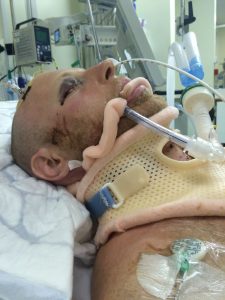 The self-employed woodsman said: “It was touch and go. Extremely close. Doctors did not know if I would survive. Many people are flabbergasted that I did with the amount of injuries I sustained.

“I have no doubt that I wouldn’t be here without GNAAS. It’s phenomenal.”

John has since visited the charity’s Langwathby airbase with his children, Jewel, 11, and Jara, 6, where he met Mr Dalton who was at the scene.

John said: “I’m here and relatively fit and well. I have these guys to thank for that. It has been emotional.”

Andy Barrington, the GNAAS doctor who gave the transfusion, said: “John had that terrible combination of multiple injuries that were causing blood loss and serious head injuries. Such were the severity of those injuries, we weren’t really expecting him to survive. But nevertheless we used all the tools at our disposal, including plasma.

“In order to prevent ongoing damage to the brain, you have to preserve blood flow. Being able to top him up with blood and plasma was key to him having a reasonable chance of recovery.

“Now we’ve got used to having plasma with us, I wouldn’t want to be without it.”

GNAAS doctor, Rachel Hawes, played a pivotal role in introducing plasma onto the GNAAS aircraft. She said: “Scientific studies suggest that up to 30 per cent of trauma patients with severe bleeding are no longer able to form blood clots normally by the time they arrive in the Emergency Department (ED), and in fact our own research confirms this to be the case in our region.

“This means that when the patients arrive in ED, they are in a condition known as coagulopathy – they haven’t been able to produce enough of their own blood clots to keep up with the bleeding and so the bleeding spirals out of control.

“By giving a more balanced transfusion, using equal volumes of red blood cells and plasma, we hope to prevent this happening to our critically ill patients, ultimately helping to save their lives.”

GNAAS relies on public donations to keep flying. Last year the charity responded to 1042 call-outs. It needed to raise £5.1m. To find out how you can help, please visit www.gnaas.com or call 01325-487263.