Fifty-nine year old Andrew Charles from London was attending a university open day in Durham with his family in March this year that could have ended in tragedy, but thanks to the chain of events that followed, he survived to reunite with the people who helped to save his life this week.

When Andrew went into cardiac arrest, his wife Gillian immediately began CPR and their daughter Simone rang 999 for an ambulance.  Passer-by Trina Duke stopped to offer help and together they continued until volunteer community first responder Ian Garrett arrived on scene.

Ian explained, “When I arrived I checked Andrew’s airway and took over CPR until a paramedic arrived to relieve me so that I could help transport the Great North Air Ambulance (GNAAS) crew from their landing site to the scene.”

Ian volunteers his time to respond to nearby life threatening emergencies alongside his day job as an electrical technician at Durham University and since the event, has convinced the organisation to make all of its’ defibrillators accessible to the public.

Earlier this year the Trust launched a defibrillator campaign to improve cardiac arrest survival rates and have identified 60 areas in the region that are in need of a community defibrillator to give bystanders the chance to help someone in cardiac arrest.

Volunteer community first responders are an integral part of patient care within the Trust. They are volunteers, trained and dispatched by NEAS to deal with emergencies prior to the arrival of an ambulance.  They are dispatched at the same time as an ambulance but may arrive first as they are nearer, and can provide early interventions in those crucial first minutes of an emergency.

Ian was followed to the scene by North East Ambulance Service paramedic Ian Nattrass, emergency care technician Alex Hall and clinical care assistant Martin Heath, as well as a GNAAS team, who together provided lifesaving treatment to Andrew before he was flown to James Cook University hospital.

Andrew said, “I can’t remember anything before I had the cardiac arrest, it happened totally out of the blue.  I think that the fast response from everyone was crucial for me surviving.   I spent eight days in James Cook University hospital and had an implantable cardioverter defibrillator fitted in case it happens again.  The specialists found no reason why I had the cardiac arrest but I’m being tested for hereditary issues.

“We were really shocked by what happened. In a blink of an eye everything can change but I’m so very grateful to everyone who helped. Thanks to them, I’m very lucky to be alive and coming back to the North East to say thank you was really important.”

Paramedic Ian Nattrass said, “It means a lot to hear that CPR is in progress for a cardiac arrest patient. CPR is the only way to keep blood and oxygen flowing to the brain which gives a patient the best chances of survival.

“When I arrived, Andrew already had a defibrillator on him from the University. I shocked him a few more times with my own kit, got a heart rhythm and stabilised him before GNAAS arrived – it was a really good team effort from all involved.

One of things that the Trust relies on is the added emergency care treatment that GNAAS doctors and paramedics can offer. 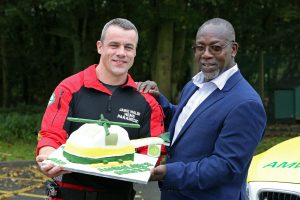 GNAAS paramedic Jamie Walsh added: “We are glad we were able to play our part in the chain of survival. This combined effort has ultimately led to a fantastic outcome for Andrew and his family.

“We had to give Andrew an anaesthetic to stabilise his condition during the flight to James Cook but the CPR that was in progress before we arrived by his wife and a bystander, ultimately gave him the best chance of survival. Andrew’s case is a prime example of why CPR and early defibrillation can save someone’s life in cardiac arrest.

“As we are a charity, we’d like to thank all our supporters for enabling us to respond.”