A nine-year-old Great North Air Ambulance Service (GNAAS) supporter exceeded expectations after shaving her hair off and raising more than £2,300 in the process.

On 14 December, Mia Selby took the plunge at school as headteacher Mark Watson buzzed off her blonde locks.

After months of fundraising for GNAAS, the nine-year-old sat at the front of an assembly hall at Leadgate Primary School, near Consett, as fellow pupils watched in awe at the act of kindness.

Fifteen inches of Mia’s hair were donated to the Little Princess Trust to be made into wigs for children going through cancer treatment. 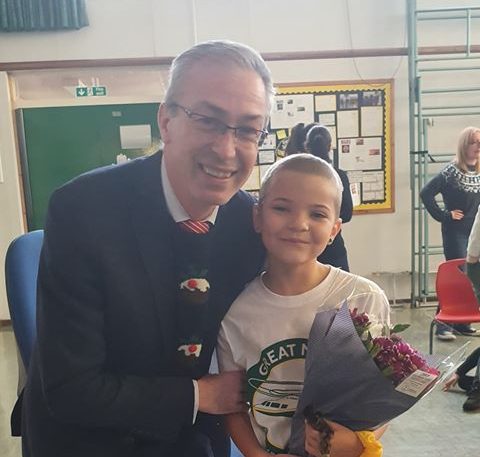 A video of the head shave spread like wildfire on social media and was reposted by American news channel Fox News.

The publicity led to a flood of donations, meaning Mia breezed past her £2,000 target with ease. Mia has so far raised over £2,300 to support our life-saving service, with more being pledged each day.

Mia came up with the idea to fundraise all by herself, after seeing GNAAS’ helicopter on several occasions and watching the crew in action on Emergency Helicopter Medics.

The youngster said: “I love watching GNAAS on TV, plus they are buying a new helicopter which they need money for.”

Mia’s love for GNAAS began when she witnessed our G-NHAC aircraft land on a field in Leadgate back in May 2018, a moment captured in the video above (Mia pictured on the right, wearing pink).

Rachel Selby, Mia’s mother, said: “I am so proud of how Mia’s headshave went. She hit her £2000 target with ease. We are so, so proud of her.

“She couldn’t have done it without everyone’s generous donations and kind messages of support, and she could not have picked a better charity to support.”

If you would like to support Mia, please consider donating to her JustGiving page.